5 Reasons Why Batman v. Superman will be Terrible

Batman v. Superman is unquestionably one of the most anticipated movies of 2016. As DC’s star-studded riposte to the Avengers, Dawn of Justice will give moviegoers the cinematic superhero clash they’ve been dreaming of since World War II – The Man of Steel and the Dark Knight, finally going toe-to-toe on the big screen, with cameos galore from scores of other comic heroes and villains, to boot.

And it’s going to be a gargantuan letdown.

Granted, I haven’t seen the film. Nobody outside the inner workings of Warner Brothers has. That said, judging from what I’ve seen from the teasers, trailers and assorted interviews with the filmmakers, I can safely predict the movie is going to be, at best, mediocre, and at worst, downright awful.

This is no blind assumption, mind you. Indeed, I’ve chalked up no less than five evidence-based, historically-informed reasons why BvS is more likely than not to be a sorely underwhelming experience. Ready to have your celluloid dreams dashed, fanboys? Well, it’s never too early to begin preparing for some impending March Sadness…

Reason number one Batman v Superman is Bad: Zach Snyder has never made a good film before

Let’s start off with the most obvious strike against Dawn of Justice – the fact that its director, over a 10-year-plus Hollywood career, has yet to make one legitimately great movie.

The problem with Snyder’s approach is that it’s all aesthetics. From 300 to Man of Steel, the dude just hasn’t found a way to match his films’ striking visuals with meaningful dialogue. Going back to his Dawn of the Dead remake all the way up to Sucker Punch, he’s never been able to fully flesh out his characters, instead giving us one-note (and usually, one-emotion) cartoons whose emotional range extends from angry face to melancholic face, with virtually nothing in-between. None of the characters in his films ever truly evolve, or really even develop, for that matter. They have their inert persona and nothing external – not the Peloponnesian War, not a zombie apocalypse, not an invasion by intergalactic fascists – seems to have any bearing on their temperament. When the most nuanced characters that have ever appeared in your oeuvre are CGI owls in a kids’ movie, you know you have a problem injecting humanity into your projects. 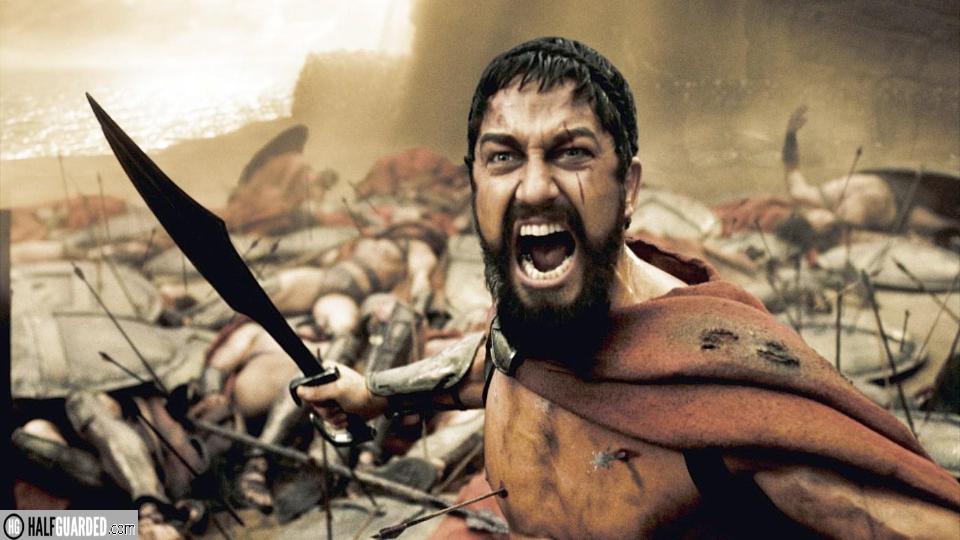 Snyder can undoubtedly do high-gloss action sequences, but that’s pretty much the extent of his filmmaking capabilities. Unable to really advance the plot through sound character exchanges, he instead resorts to cheap short-cuts, primarily, an overuse of montages. Dawn of the Dead and Watchmen are probably the guiltiest examples: at times, they felt more like high-budget genre pics spliced in between music videos than bona fide motion pictures. This Zach kid can produce some outstanding trailers, that’s for sure. Anything over five minutes in length, however, and he’s way over his head.

Reason number two Batman v Superman is Bad: There is FAR too much going on in the script

When you factor in all of the elements going on in Dawn of Justice, it seems impossible to wedge it all in there adequately without it turning into a four and a half hour movie. And since Zach Snyder can hardly do two and half hours without choking on his own tongue, that really doesn’t bode well for this picture.

Batman v. Superman is supposed to be some kind of Avengers-style event/ensemble movie, but it’s doing everything backwards. Whereas Disney’s mega-crossover flick was the end result of several character-driven, stand-alone movies, DOJ is a mega-crossover flick with the end result of several character-driven, stand-alone movies. With Superman as the only returning character – save a few bit supporting players from Man of Steel – the film is forced to introduce and provide exposition on literally dozens of new characters. And since this is a superhero movie, you really have to explain both the superhero and the alter ego façade, so that just slabs more meat on the table. Did I mention that Zach Snyder is really, really bad at character development?

Just explaining how Batman and Superman wind up in the same location has the makings of a feature-length movie. Now, to add to that a new central villain (more on that dubious casting choice in just a bit), a new mega-monster threat and three supporting superheroes – all of whom are expected to carry their own motion pictures over the new few years – with their miscellaneous supporting characters? It’s like dropping an elephant on a house of cards, only to blame the table for the deck splattering all over the place.

Reason number three Batman v Superman is Bad: Judging from the trailers, the acting is going to be terrible

It’s very difficult for actors and actresses to put on good performances in superhero movies. That’s primarily because the best acting is derived from capturing the inner essence of one’s own humanity – their failings, their worries, their despairs and especially their vulnerabilities. When laser-eyed rock monsters from outer space are kung-fu fighting men dressed in neon red pajamas in front of a green screen, perhaps you can see how even the best of thespians wind up turning in such lukewarm performances.

Ben Affleck is a decent actor, but he’s just too everyman to play the Caped Crusader. Portraying Bruce Wayne, he still looks like some random dude you’d see at a Bruins game, and not a borderline insane, vengeance-obsessed one-percenter (whereas Birdman and American Psycho definitely looked the part.) We haven’t seen much of Wonder Woman, Cyborg or Aquaman, but considering their gimmicky, metaphysical natures, they’re likely to be even less nuanced than Superman, whose virtual immortality and god-like powers already makes him a deeply unrelatable – and frankly, unlikable – protagonist.

Which brings us to the casting of Lex Luthor, which may very well be hypernasal cruise missile that sinks the entire movie. When I think of Lex Luthor, I think of someone domineering, someone who is intimidating not because of his physique, but because deep down, you know he’s eons ahead of you cerebrally. If Superman is the embodiment of strength, Luthor represents the embodiment of intelligence – in many respects, one can even view Luthor as the original idea of Superman, a telepathic villain, made even scarier sans the whole supernatural shtick. Judging from the latest trailer – which I do believe is half the actual film – Jessie Eisenberg is playing the character as an evil Michael Cera clone, a pipsqueak with about as much charm and formidability as an entry-level I.T. nerd. If the central antagonist in the DC Cinematic Universe is going to be an aggrieved, monster-making Mark Zuckerberg-beta male, their film cosmos is undoubtedly going to be severely hampered.

Superhero movies, by their nature, are silly. Even the great ones – Spider-Man 2, The Dark Knight, the Donner Super-flicks – port about this sense of grandiose, melodramatic absurdity. When you have JFK Jr. dressing up in bondage gear and using NASA technology bought with shareholders’ money to do battle with an anarchist guerilla warrior cosplaying as Beetlejuice, I don’t care how many allusions you throw in there about NSA spying and the War on Terror, it’s still fundamentally ridiculous.

What concerns me about Dawn of Justice is that it looks like it is trying teeth-grindingly hard to come off as some sort of “serious” action-drama in the vein of Heat or Elite Squad, despite completely abdicating itself of any associations with reality. We’ve already seen some glimmers of “philosophy” gleaming in a heated exchange between Clark Kent and Bruce Wayne about the limitations of authority, but when that ultimately leads to a stormy street battle between an Amazonian goddess-woman dressed like Xena and what may or may not be one of the cave trolls from The Lord of the Rings, perhaps you can see how the social commentary gets muddled a tad.

The central idea of the film appears to be a symbolic battle between messianic figures. Superman is a literal god-being – emblematic of the government, the military, what have you – while Batman is the closest man can get to godhood without actually being a god – i.e., a Plutocrat, essentially. If you really want to read too much into it, the physical clash here represents an ideological rift between the two ruling powers of society (political power and business power) and what their roles are in protecting the rest of society – and in that, what personal sacrifices they must make in order to carry out that very task. It’s an interesting, thought-provoking debate, to be sure; alas, when that debate manifests itself in the form of robot-assisted rooftop battles and the appearance of a bearded Merman, one can’t help but think the filmmakers are going about things in most misguided of fashions.

Reason number five Batman v Superman is Bad: The whole point of the movie is an excuse to make more movies … and merchandise.

Batman v. Superman, at heart, is a movie that exists solely for the existence of future movies. It’s going to make a bajillion dollars at the box office, and from there, it is going to be sequel, prequel and side-story madness. I, for one, cannot wait for Red Tornado v. Ambush Bug in 2019.

In the promotional materials, so much has been given away about the film that you can pretty much deduce the plot already. Batman is mad because Superman is all powerful and stuff and he’s afraid he might go rogue and kill a whole bunch of people. Lex Luthor is a wormy dweeb who envies both of them, so he either creates/summons Doomsday to mess everything up for everybody. Recognizing the greater threat from the Luthor/Doomsday consortium, Bats and Supes say “let’s be friends” and decide to start a tag-team. Oh, and for reasons that are yet to be unveiled, a whole bunch of other super-beings show up, probably because there’s some even greater threat (Darkseid?) looming in the shadows, Thanos-style, waiting to bang stuff up even more spectacularly in the Justice League movie. Frankly, there’s not a whole lot of movie you can make out of that, but you know what you can make? Toys, and lots of them. 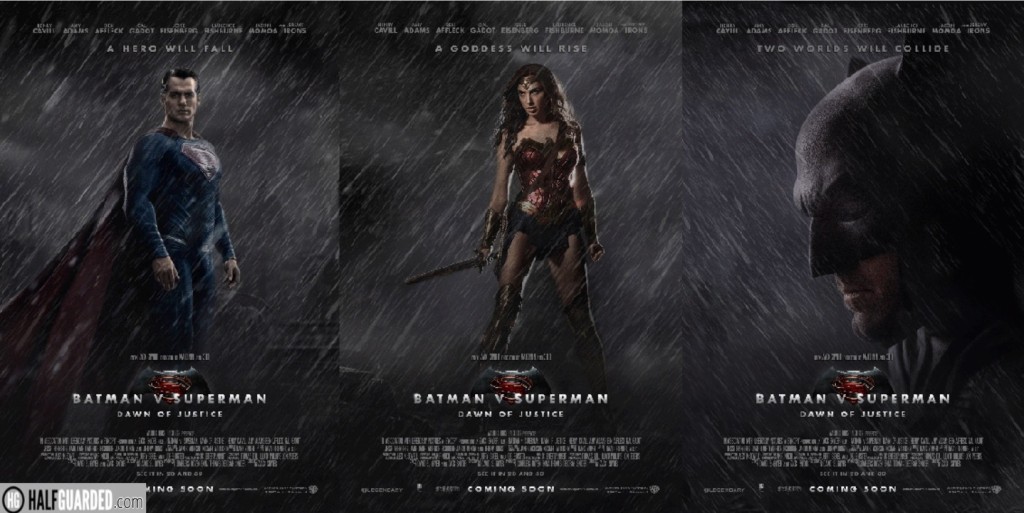 There is no impetus for Warner Brothers or DC to make a quality movie. They know that no matter how bad the script is, or how lackluster the acting, or how corny the dialogue, or how plastic-looking the special effects, it’s going to sell tickets. At the global box office, the thing is going to generate at least $1 billion, and merchandise sales? Per the Hollywood Reporter, Batman and Superman-branded goods are already generating in excess of $600 million annually; once the marketing blitzkrieg for BvS cranks up, that’s a sum that’s going to easily double, triple, maybe even quadruple. With each new movie, you get another new character to spin off, which in turn, creates more opportunities to sell more action figures and Hot Topics shirts and video games and fast food memorabilia cups. Rinse, recycle, repeat, rehash, reheat and reap the revenue. Considering the real intent of the movie, perhaps it should have been subtitled Dawn of Profits instead.

Official HG statement on the terrorist attacks in Iraq

Official HG statement on the terrorist attacks in Iraq