ESPN recently aired a new “30 for 30” documentary, on the depressing real life story of the Schultz Brothers, John Du Pont, and the Foxcatcher wrestling team, entitled Prince of Pennsylvania. Before reviewing the program, a few things to note:

If documentaries are not your thing, you can also watch the cleverly titled, feature length film, Foxcatcher to get another take on the story. Released in May of 2014, Foxcatcher stars Steve Carrell, Mark Ruffalo, and Channing Tatum. Despite some liberties being taken and actual events being embellished, this film also delved into the story of Dupont and the Schultz Brothers. It was even nominated for several Oscars. If you want the real deal though, check out Prince of Pennsylvania.

The documentary begins with younger brother Mark Schultz winning an Olympic gold medal in freestyle wrestling in 1984. Mark talked about how difficult Olympic training was for Americans. It required tons of work and literally no money. American athletes struggled to train, work, and survive because they were unpaid. It was also extremely difficult to compete with “Eastern bloc” and Russian athletes because they were paid a salary and were really well-cared for. Mark legitimately felt that he and his American teammates were at a significant disadvantage due to lack of funding.

Of course, this is where the eccentric John du Pont comes into play. Du Pont grew up extremely wealthy and somewhat isolated; living with his mother in Pennsylvania after his parents divorced. Being the youngest sibling in the family, John’s brothers and sisters were older and rarely around. John’s mother would actually pay other children to play with John because he did not have any of his own friends. Living up to his mother’s expectations was always difficult for him. He had attempted to become an Olympic swimmer and pentathlete, but could never reach an elite level in either sport. Confidants felt that John had always felt like a disappointment to his mother and never had any true friends. He was always an odd guy. His family, through its vast fortune, amassed a thousand acre estate in rural Pennsylvania, called Foxcatcher, where John spent most of his life. 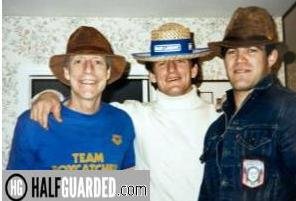 In 1986, du Pont called Mark Schultz and essentially offered him a paying job as a wrestling coach at Foxcatcher. Du Pont appreciated amateur athletes, who strived for glory, instead of money. He wanted to financially support amateur athletics and help the Americans compete with the better funded Eastern bloc teams. Mark took du Pont’s offer and together they built the strongest amateur wrestling program in the United States. Du Pont supplied the wrestlers’ with salaries, housing, and training facilities. Mark provided great coaching, leadership, and credibility to the wrestling program. It was a great match and the Foxcatcher team was a quick success, despite the peculiar past of its benefactor, du Pont.

As time passed, Mark became less and less happy with du Pont. After winning gold at the World Championships in 1987, Mark felt that du Pont was progressively changing for the worse. According to Mark, Du Pont became obsessed with him and would constantly invade his privacy. Heading into the 1988 Olympics, Mark felt stifled and uncomfortable with du Pont’s odd behavior. Uncharacteristically, Mark finished in 6th place at the 88’ Olympics. Mark blamed du Pont. After his lackluster performance, Mark left the Foxcatcher team and never wrestled again; du Pont had been that strange and overbearing.

With Mark leaving, du Pont had lost his best wrestler and coach. In addition, also in 1988, du Pont’s own overbearing mother passed away. These were two crushing blows for du Pont in a short timeframe, but du Pont, did not consider himself a quitter. He still wanted to propel American amateur wrestling to greater heights and knew the right guy for the job.

With Mark out of the picture, du Pont recruited Mark’s older brother Dave, who also won a gold medal at the 1984 Olympics. Mark discouraged Dave from moving out to Pennsylvania, with du Pont, but Dave decided otherwise.

At Foxcatcher, Dave quickly embraced du Pont’s way of thinking. He wanted to continue wrestling and beat the Russians. The goal was simple: be the best in the world. After Dave joined Foxcatcher, other elite amateur wrestlers joined the fold. Kevin Jackson, Mark Coleman, and others made the team even stronger than before. In 1993, the American team defeated the Russian national team at the Worlds. Things were good.

Dave’s move to Foxcatcher had been a great success; even more impressive than his younger brother Mark a few years earlier. Over time, with their success on the mats, Foxcatcher became more and more of a community, with the wrestlers living on the farm with their families. The wrestlers could train all day, not worry about money or working a second job. They were finally competing on a level playing ground with the rest of the world because of du Pont. Wrestling was their primary focus.

Still living on the estate himself, Du Pont befriended many of the wrestlers. He would often invite them to his large house and would actually train with them as well. Gradually, du Pont felt that he was improving as a wrestler, despite his advanced age and lack of athletic ability. He created a “Masters” circuit for older amateur wrestlers. Du Pont would often win tournaments because there were no other competitors in his weight class. Most of the wrestlers humored du Pont, but none of them felt he was a legit wrestler. Deep down, it seemed, du Pont just wanted to be accepted by “the boys,” but the wrestlers never took him seriously. Over time, du Pont picked up on this. Again he did not fit in, did not have any real friends, and felt rejected. This was the predominant theme of du Pont’s life.

By the mid 90’s, du Pont had steadily become more and more delusional. His family and entourage began to encourage him to get pschychiatric help or medication, but he claimed he was fine. As time went on, his paranoia was so out of control, he added surveillance cameras all around the farm and hired armed security guards to protect him. Some of the mental health issues may have been self-induced, through drugs and alcohol, but du Pont legitimately felt that there was “something” in the trees and bushes on the farm that was trying to get him. His condition grew worse over time.

Du Pont was so paranoid he began to carry a gun with him to the wrestling practices. Things were getting real uncomfortable, but the most of the athletes were able to look past du Pont’s behavior because they had one obsessive goal in mind; to be the best in the world. On October 12, 1995, du Pont took it to another level, when he pulled a machine gun on wrestler, Dan Chaid, yelling at him to “get off the farm.” Chaid left and never went back. In retrospect, Chaid should have taken the rest of the team with him.

Dave knew that du Pont was unstable. He had heard the stories and had seen the behavior, but he felt that he could handle du Pont. Dave’s goal was to win another gold medal in 1996 and he was not going to let the eccentricities of du Pont to get in his way. In the end, though, Dave could not have been more wrong.

On January 26, 1996, du Pont drove up to Dave’s house on the farm and shot him three times, killing Dave in front of his wife. Dave was murdered for no reason. His wife lost her husband. Dave’s two young children lost their father to a madman. It was a true, real-life tragedy.

Du Pont was eventually arrested, convicted for third degree murder, and died in prison. He was buried in his Foxcatcher wrestling uniform.

I’m not quite sure what the moral to this story is. Maybe, if it seems to be good to be true, it probably is?

My recommendation is: you watch it and make your own conclusion.

Dazza's 15 Moments in Television to watch before you die