With Coronavirus fever at an all time high, shoppers are finding it harder and harder to find the essential items they need at their local
supermarkets. Items like hand sanitizer, bottled water, and toilet paper are being hoarded by customers. However, one item is flying off the shelves at an even greater rate than the rest, and that’s condoms.

It seems people plan on having lots of sex while quarantined in their homes but they also want to be safe about it. Researchers conducted a poll and it seems that the condoms aren’t so much to protect from STD’s but more so to prevent anyone from having children as monumentally stupid and douchey as Ivanka, Donald Jr., and Eric Trump.

We interviewed some shoppers at a local drug store to ask why they were stocking up on the latex border walls and here’s what some had to say:

“It’s not so much that I don’t want kids, I actually do, but I’ve been following Donald Trump Jr. on Twitter and if the President of the United States can have a child with such a severe learning disability, I don’t want to take any chances.”

“I plan on doing a lot of fucking with my wife and her sister while we stay in the house but there’s no way I’m knocking my wife, or her sister up with a kid like Donald Trump Jr. That guy looks like he date raped the nurse who handed him to his mother in the delivery room. I don’t believe in hitting kids but if my son has that smug look on his face I’d never stop punching him in the face.” 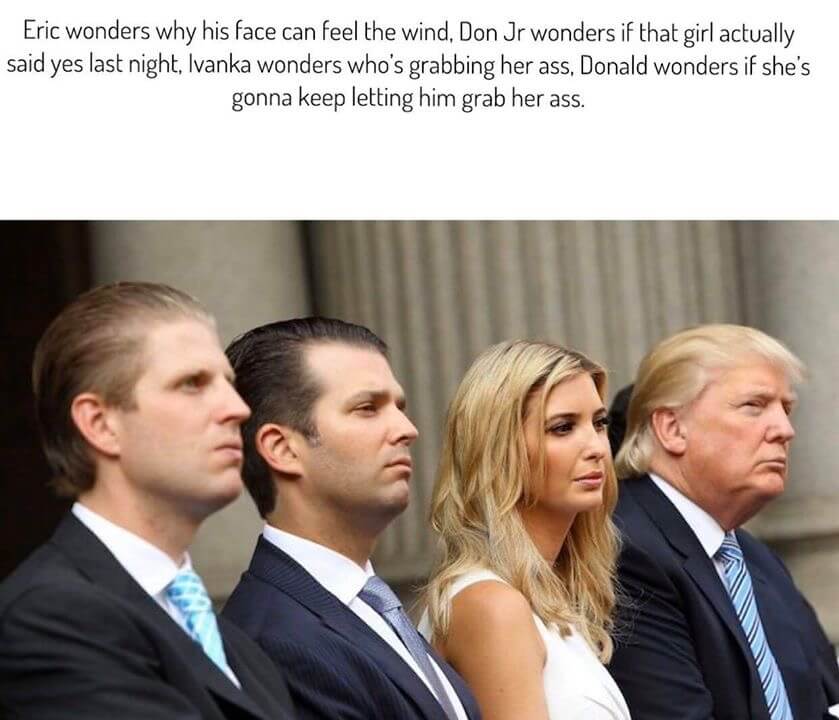 “My husband and I want to make the most of being stuck in the house so we planned some romantic evenings over the next few weeks. I love kids but have you seen Eric Trump’s teeth? He looks like he could chew his way out of my uterus like the little guy from Alien did to Sigourney Weaver. Also, giving birth naturally would be too hard with those teeth. I don’t want to have a baby and a hysterectomy at the same time.”

“I’m gonna have to use a lot condoms, plus my girl is on birth control and the morning after pill because of Trump’s kids. If I had a daughter as stupid as Ivanka I’d have to quit my job so I could stay home and make sure she didn’t hurt herself while she played with the cat toys. Don Jr. called Saturday Night Live “S&L” and said his dad is treated worse than presidents who’ve literally been assassinated. If my kid said anything that stupid I’d have to stop feeding him. I’m gonna wait to see who the next president is before I decide to have kids. Hopefully their kids won’t be preppy, scumbag, moron, dickheads.”

Trump Blames Coronavirus On That Time Obama Coughed In The White House.

Trump Blames Coronavirus On That Time Obama Coughed In The White House.