Donald Trump Nihilist Candidate for President of the United States (aka: why he isn’t an extremist)

The other day, I saw a friend write something along the lines of, “Donald Trump is what happens after you pander to the extreme right wing.” This struck me is odd because while Trump has nominally been known as a Republican for some time, he was never an across the board ideologue. So, is Donald Trump an extremist?

Now, before I begin, let’s note: he’s Donald Trump. He’s over the top, blustery, and a public ass to people. He’s a bully and in no way would I want him as president. Beyond that, he’s essentially a politician and I don’t really believe much of what he says. Bernie Sanders? I believe him. Agree or no, I fully respect that his views are consistent (more or less) and aren’t calculated to gain political points at a given moment in time. (Hillary Clinton on the other hand …)

Almost nothing Trump says seems rooted in an ideological belief – instead he is the first true mainstream Nihilist Candidate. He may be the most platitude driven politician ever. And, sure, many of them speak generally, but they tend to do so with language that is a wink and a nod, where their supporters know, “OK. I get it. He/She is speaking in code.” That’s why you’ll hear someone say, “I want to make sure that the American worker is protected and not at a disadvantage compared to those overseas.” Well, duh. Who could be against that on its face? But that could mean raising the minimum wage, lowering it, raising tariffs, and so on, all depending on who is speaking.

Trump just says, “I’m gonna do things, watch.” Or quotes Mussolini (incidentally, it’s not like that quote was on its face awful or anything).

I’ll just go down some of the main issues that drive things; no one really cares all that much what a politicians stance is on HUD or anything.

This is the first one that usually gets thrown around by both sides when calling someone extreme. Realistically, there are three positions: no abortion; abortion sometimes but not all the time; abortion all the time.

Trump is in the middle there, though his current “stance” is leaning towards No Abortion. He used to be known for being pro-choice but has in recent years stated that he’s pro-life, with exceptions for the usual reasons. Now, if you think someone being pro-life(ish) is an extremist position to take, then, sorry, but you’re probably the outlier. There are so many millions of pro-life always and pro-choice always people that I can’t see classifying someone who (in theory) would allow abortions to be legal in certain circumstances as an extremist.

Trump was given shit by THE POPE.  He says things about owning a Bible but NO ONE really believes the man is a Bible thumper.  No one.

No doubt, this is one where Trump is almost as to the right as one can get. It’s the central basis for his candidacy. He talks more about building a big wall than he does anything. I have to take him at his word that this is important to him, but a part of me feels like if he said, “I WANNA BUILD A MONORAIL TO MEXICO” and it increased his chances of being elected, he’d say it. What’s funny is that I’ve recently heard Ted Cruz trying to go further to the right than Trump on this, saying that because Trump wouldn’t necessarily go out of his way to round up illegal immigrants he isn’t hardcore enough.

Note: Ted Cruz is perpetually shiny and I don’t know why. He also has a nose like a rat.

Quotes I’ve found indicate that he’s opposed to gay marriage but he never brings it up from what I can tell. I suspect it’s political pandering more than anything. It’s also hardly an extremist position to take, even if true. It may be incorrect but when California of all places passed laws to prohibit gay marriage, I can’t really say that it’s a no-brainer issue. Also, for whatever reason, Trump saying, “Eh. I don’t give a shit” seems like something he’d say about gay marriage, even though he hasn’t.

Trump wants to cut taxes. This is a traditional position taken by basically every Republican for decades. It’s not extremist, it’s just the view of Republicans. His proposed tax rates aren’t absurdly low or anything.

On the other hand, he has made some remarks that are anti free trade agreements (NAFTA and such). These are couched in the, “Bring American jobs home” language. He talks more about “fair trade” than “free trade” which are left of center buzzwords.

I bring this one up only because it came out of nowhere. When South Carolina Governor, Nikki Haley (a Republican, no less) went out and took down the Confederate (battle) Flag from the State Capitol, it was news. It wasn’t news to people where I’m from, because who the fuck flies the fucking Confederate Flag these days? But it was important to Carolinians. Trump flat said that it should be down and put in a museum. This was even used against him recently by Ted Cruz! It may be the most level-headed thing I’ve ever heard from Donald Trump.

(Side note: Get over the stupid ass flag. It was literally a flag flown by people who did not want to be Americans. It is very really an anti-American flag.)

He’s been in favor of a national policy to permit medical marijuana but otherwise wants to leave it up to each individual state. This is definitely more center than right, if not left of center. He’s closer to Bernie Sanders than Ted Cruz on this one. I wish he’d be closer to Ron Paul than any of them, but oh well. (Oh, right, for those who don’t pay attention, the politicians who tend to favor the greatest legalization of drugs are libertarians – the “extreme right” in a way.)

Campaign finance and all that. I don’t think anyone ever really voted for someone because of their views on this. It’s something candidates say because, “keep the money out of Washington” is an easy sound bite. All that said, Trump has been pretty consistent in not liking SuperPACs and shit like that. I suspect this is because he’s a billionaire and can self-finance. On the whole, that would make him more left than right though.

Trump hasn’t been a hardline “this global warming shit is a fraud” like some. He seems a bit concerned about the effect cap and trade would have on the economy, but I remember him saying something about accepting global warming. Ultimately, it’s just not a real issue. People get visceral about guns, abortion and such, and the economy is always the most important thing (“it’s the economy, stupid”). Global warming/climate change/whatever is just there. It’s currently too cold in most places for anyone to see this as the most important issue of the day (regardless of whether it is or not).

Eh. He pretty much just says, “I’ll go kill the bad guys.” Except… he’s very proudly told everyone who will listen that he opposed the 2003 Iraq War. This, dear reader, is hardly a right wing position to take.

For a while, he was pretty leftish on guns. In the past year he’s magically started to love them. His responses and such are all very vague and useless (shocker).

In 2000, he was all for universal healthcare. Today, he’s opposed to Obamacare.

The thing with Trump is that he’s simply an asshole. He’s a loudmouthed jerk and people instinctively don’t like him. They then more or less assume that their dislike is for more substantive reasons – as if disliking Trump for wearing Ted Cruz’s face for a toupee isn’t good enough.

He’s a political animal, maybe more than any other candidate. Hillary is a liar. She’s a born liar. She can’t help but lie. I think she’ll say or do what’s needed to get elected. But: she also has her beliefs and views. I can’t see her totally flip flopping on key issues, by and large. She’s not going to suddenly be pro-life, or pro tax-cuts or anything because it helps her. Trump has within the span of a decade gone from completely pro-choice and pro-universal healthcare to not. What the fuck, man? 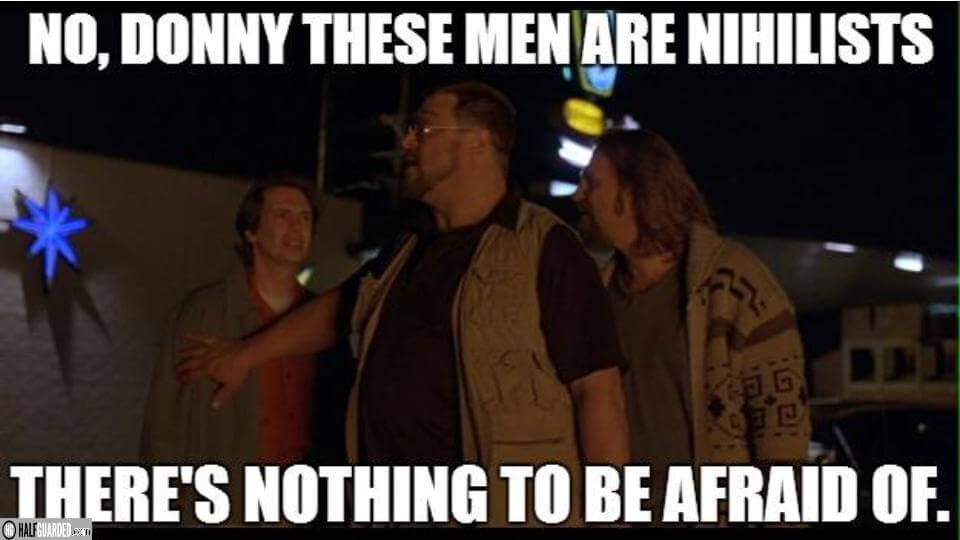 Sanders is, in many respects, the most non-traditional candidate. He’s proudly a democratic socialist and makes no bones about wanting to see America become much more like a European nation. This may or may not be the correct viewpoint, but it’s not one that’s been traditional. He’s likely far more “extreme” than Trump but only because he has actual convictions.

Ted Cruz seems like the right wing version of Hillary. I think he has some principles but what he sees as important, what he will publicly emphasize, changes with the voters.

Personally, I like Marco Rubio, but that’s just because he once mentioned having to pay off student loans and has had speeding tickets. I don’t think Hillary has driven a car since the 1980s. (I live in Illinois so my vote for President doesn’t count.)

Is Trump an extremist? I don’t think so. He’s the definition of sizzle over steak. So much of what currently makes him popular is simply his brash attitude. He stands out and standing out works well in a multi-horse race.

Deep down, I think he’s far worse: he’s nothing. He’s for whatever makes him popular, far more transparently than any other politician running. That’s what makes him not fit for president: we don’t know what he’d actually do – and neither does he.