Today is a day when I’ve seen people get upset about whether a company that makes crappy tasting eggs has the word Easter emblazoned big enough.  Today is a day of WAR!  The war against Easter!

I’ve only seen reference to said war in a few places and I don’t buy it much. Christmas I can absolutely see being ape’d by others because it’s all about presents and money being spent on presents and judging how much you love someone based on how much money you spend on them.

Easter isn’t really that kinda day.  It’s remained a relatively religious day.  There’s been, I guess, some secularization of the weekend over the years, mostly in the form of businesses and schools calling Good Friday something else (I have no idea what – I went to Catholic schools my whole life).  Whatever.  That’s nothing.  The Easter Bunny? Now that’s something.  That guy is a cute Trojan Horse if I ever saw one.

I have NO clue how this one started.  I can guess that it was a way to get little kids into the day.  I know people sometimes are like, “See, you have to get them early and brainwash them” yada yada.  But that’s true of everything in life; children have to be RAISED.  They don’t come already knowing things, you have to teach them stuff.  Granted, I don’t have kids, but I know people that have kids (morons) and I’m always reminded when a kid is disciplined or told not to do something that kids just don’t know what to do in life.

Kick someone?  Why not?  “Well, little Mikey, the reason is because…” and then they say a bunch of rational things until they realize the kid doesn’t understand and finally fall back on, “because I said so” and “because if you don’t listen, I’m taking shit away.”

I heard once someone say something to the effect (affect?) of, “Telling kids that ‘because I said so’ is bad.  It teaches them to defer to authority and not think for themselves.”  All that.  Which makes sense to me.  I’ll bet it’s true.  That’s also how the world works.  When a cop pulls you over and says you were driving too fast, he doesn’t have to give you the reasoning behind speed limits, he gets to just point at his gun and tell you to obey or he’ll shoot you.

(Dear black people reading.  How are you?  I know that the above scenario may confuse you but that really is how white people are treated by cops.  Crazy, right?  We do not get shot on sight.  Not gonna lie: we have it pretty good.) 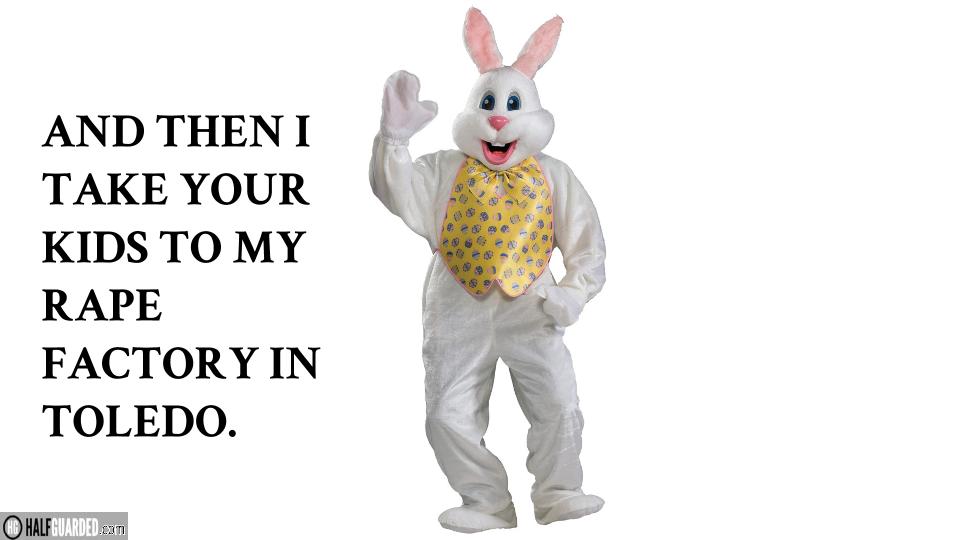 Anyways.  The Easter Bunny.  Like Santa but … he’s a gigantic rabbit.  Rabbits don’t even lay eggs.  What is this thing? Fuck it, let’s see what Wikipedia says about the Easter Bunny.

The Easter Bunny (also called the Easter Rabbit or Easter Hare) is a folkloric figure and symbol of Easter, depicted as a rabbit bringing Easter eggs. Originating among German Lutherans, the “Easter Hare” originally played the role of a judge, evaluating whether children were good or disobedient in behaviour at the start of the season of Eastertide.

Fucking. Awesome.  Mostly because my mom is Lutheran and one of the big gripes was that Catholics were using too much physical symbols and shit for prayer and that there wasn’t enough focus on just The Main Man, so anytime I see them getting all pagan-y on me, I revel in it.  They created the EASTER FREAKING BUNNY 400 years ago; I’m totally throwing this in her face.  I’m a bad son.

In ancient times, it was widely believed (as by Pliny, Plutarch, Philostratus, and Aelian) that the hare was a hermaphrodite. The idea that a hare could reproduce without loss of virginity led to an association with the Virgin Mary…

Why the hell did people believe this?  Are rabbit dicks impossible to find?  Also, I don’t think hermaphrodites can just breed with themselves.  They aren’t amoebas.

Whatever.  So, people thought rabbits were having virgin births and so that made them holy or something.  I bet folks still ate them when possible.

Orthodox churches have a custom of abstaining from eggs during the fast of Lent. The only way to keep them from being wasted was to boil or roast them, and begin eating them to break the fast. As a special dish, they would probably have been decorated as part of the celebrations. Later, German Protestants retained the custom of eating colored eggs for Easter, though they did not continue the tradition of fasting.

Don’t eat eggs?  Eh.  The rest of us don’t eat meat.  That’s actually not a bad explanation for why we give eggs now: Easter is basically the post weigh-in meal.

Northwest European folklore the “Easter Bunny” indeed is a hare.

I’m sure someone reading this knows there’s a difference between a rabbit and a hare but who gives a fuck?  Crocodiles and alligators are the same thing too.

This all was inspired by a kid I know who got some Easter Eggs and inside was money. So, the kids sees the money and says, “These aren’t from the Easter Bunny.  He doesn’t give out money.”

I love the weird rules kids create for the world.  There’s an Easter Bunny, of course, but this huge rabbit that shits out eggs and is magical wouldn’t give money – THAT doesn’t make sense.

I wonder when kids stop believing in the Easter Bunny?  Santa I can see them holding onto for a long time because they have stakes in that guy.  Don’t believe and you’re risking not getting a busload of toys.  No kid is taking that chance.  But the Easter Bunny?  Oh no, you’ll lose out on a chocolate egg that some asshole cut the center out of – who the fuck wants a hollow piece of chocolate?

It also seems more embarrassing to believe in the Easter Bunny.  It’s a bunny, so it’s just cute and cuddly; Santa commands flying reindeer and is also a human being.  It seems easier to believe in a magical person than a magical rabbit.  Plus, we all see big fat guys everywhere.  No one has ever seen a 5 foot tall hare.  It requires you to not only believe in a magical teleporting rabbit that gives chocolate eggs, it also demands you believe this thing is 10,000 times bigger than any other rabbit you’ve ever seen.

Plus, the Easter Bunny is associated with having to go to the long version of Church. The one where you have to dress nice and there are 1000 other people there for the only time all year.  Then sometimes you get shifted to the secondary chapel and that thing is just in the school gym and seriously how religious does something feel when you see the basketball hoop above the priest’s head?

I have no idea where I am at right now with this thing.  This was all gonna be about 50 words and that’s it.  I have no filter, do I?

But, really, no one cares there’s a difference between a rabbit and a hare.