UPDATE: Please click our latest story link HERE to get the full truth – including how every other site is misrepresenting things.

News has begun to trickle out that Jones and the local district attorney are about to reach a plea deal where Jon Jones pleads guilty for charges stemming from his now infamous attempt at driving while under the influence of being awesome. On September 29th even there is a scheduled plea hearing. This doesn’t mean there will for sure be a plea deal entered that day, as a judge may reject any proposed deal, the deal may fall through for any numerous reasons, or the judge himself may simply be calling the hearing to get a feel for where things are at. Nonetheless there’s a lot of chatter.

Look, this stuff doesn’t get out by accident.  Jones’s attorneys haven’t said a peep – not a single word at all – about the case since right around that fateful day when Jones realized he doesn’t know how to drive.  This makes them good lawyers.  They aren’t there for PR (though that can sometimes be part of a lawyer’s job): they are there to save his ass.  There are very, very, very few good things that result from speaking publicly about an ongoing criminal trial.  Especially one where a plea deal is likely.  You can say something out of turn – even on accident – and suddenly have a pissed off a vengeful district attorney who feels like she’s being made to look weak; like she wants to let the star athlete off the hook.

Going public and being remorseful might sound like good PR (and it may be down the line) but if Jones himself speaks it could be used against him later (“You want us to drop the charges for the crime you said you were sorry for?  Suuuuure.”) and if his lawyer speaks, the words just sound like canned crap that no one pays attention to and which – again – can only really serve to give motivation to an opposing lawyer or even judge.

A lawyer might go public with his case if there was a serious chance of a real jury trial and he wanted to “pollute the waters” as lawyers say even though they can just as easily say,”Get in everyone’s head.”  This isn’t that.  This is a case where a guy hit someone and ran away.  As of now, we don’t have evidence that Jones was under the influence of any drug at the time of the accident.  Oh, we might know he was but that’s not exactly a strong legal basis for charges.  And people run from accidents all the time.  Even innocent people.  They’re in shock, etc…  Many states have laws that say you can flea the scene of a crime and if you come forward within 24 hours it isn’t an offense.

And the DA has no real reason to go forward with leaking this information.  Making public word of a deal with a local celebrity before one has been made?  It makes her look like she’s caving to the rich and famous, once again, like always happens.  Plus, the phrase “plea bargain” while accurate still has that feeling of “bargain” to it.  If/when Jones pleads guilty, it will almost assuredly not carry with it any jail time, and may not even be a felony on his record.  If people hear “bargain” and then see no jail time they think, “He got away with it.”  If no one says anything in public – which has been the case so far – it allows the lawyers to craft a reason for the sentence.  “Hey, we got him to confess guilt to a crime!” is better than, “We promised him no jail time if he just pretended he gives a shit.”

The MMA hat notes that Jones’s name is slowly making its way out in what appear to be very calculated ways.  Suddenly the word is he’s in there all the time helping Holly Holm get ready to lose to Honda Housey.  No coincidences in life, people.  Plus, Cormier is still talking about Jones like he’s the true champion – everyone does.  The UFC hasn’t gone into dead silence mode on Jones, which they very well could on shows they produce.  They reference him, talk about it, and little things like statements about how he’ll grow up and change from this all set the stage for America’s favorite past time: the reformed star!  He can become the Robert Downey Jr. of MMA.

He’s still the greatest fighter on earth and if Mike Tyson can rape someone, eat part of someone’s face, and still do business on PPV – Jones can too. (Bless you, Tyson, for forever setting the bar as low as possible.)  And Jones will need to fight soon.  I doubt he’s hurting for money but it’s been quite a while since he made any.  And that Superbowl show is coming up soon and with news about to break that he’s reached a deal, boy that would make for quite a return, wouldn’t it?

The UFC is in the midst of its “Go Big” campaign for this quarter or however long it lasts.  I believe the final event is the January show headlined by Lawler vs Condit.  Dana talked about Werdum not fighting until March (which his people then denied so who knows what’s going on there) but … nothing about February.  They have almost every big name fighting from mid-November through December, leaving a curious blank spot in February.  And, look at that, the winner of Cormier vs.  Gustafsson would probably be ready to fight around February-ish.  And half the build for the fight has centered around Jones anyways!  Cormier brings up Gustafsson’s fight with Jones; the UFC brings it up; Alex brings it up.

And obviously you can’t even talk about Cormier being champion without mentioning why he’s champ: because Jon Jones is a moron.  The tea leaves never lie; they tell the truth and then give you tea.  They are good like that.  Sometimes you can try coca leaves but I wouldn’t recommend them in this case…  Jon Jones pleads gulity soon and then the UFC will announce his return about two weeks after that.  In fact, wouldn’t it lineup perfectly if Jon Jones pleads guilty in the next few weeks and then was on hand in Houston to witness two men he beat fight for his belt?

Jon Jones pleads guilty, walks into the cage, and starts his redemption. The greatest fighter on earth is coming back – hope you enjoyed keeping the belt warm for him, guys. 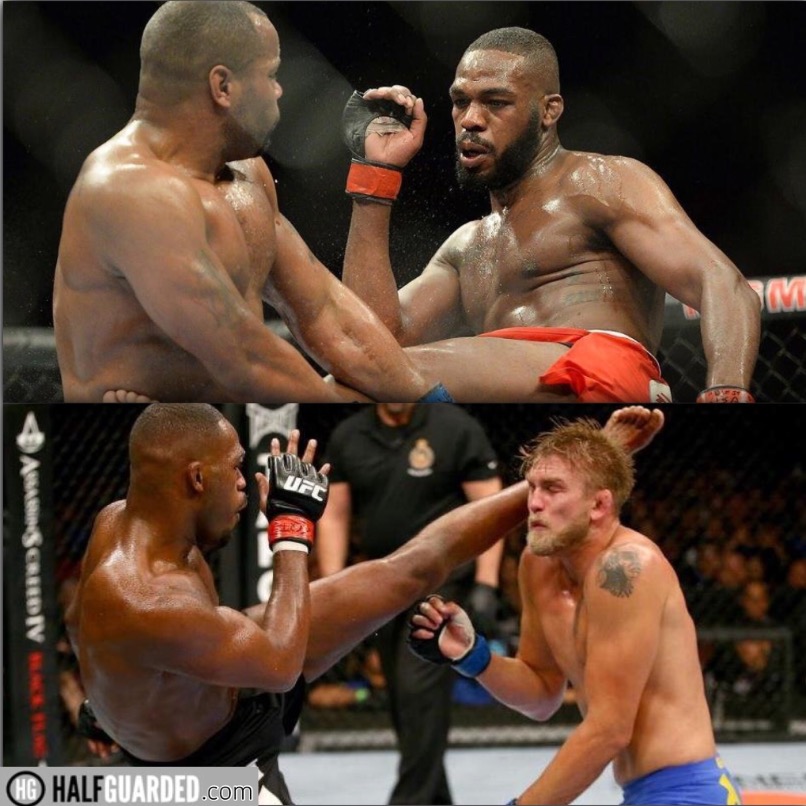