Millions Flock To The Polls On Election Day In An Effort To Get A Sticker.

The mid term elections are finally here and there are reports of record turn outs. Millions have registered including a record number of young people sparking a fuse of hope for our nation going forward.

Some attribute this to the polarizing emotions towards President Donald Trump. Most feel his enemies are chomping at the bit to vote democrat, while his supporters are equally anxious to vote republican.

I’ve done some of my own research and spoken to American voters and it seems there is another reason for the record turn outs this year, stickers.

We’ve always loved stickers. We were raised on stickers. When we were kids we got stickers in kindergarten for not biting other children, not eating Play-Doh, and not shitting our pants. Now we get them for casting a vote on the men and women who will propose laws and make decisions on things like taxes, highway repair, and aborting a fetus you’ve grown tired of. It’s the American reward system. 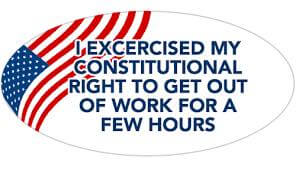 I caught up with some voters earlier today and they had this to say when asked why they came out to the polls:

“Well, because we need Trump out of the White House, he’s racist and they all wear that stupid hat. Plus this sticker is mint.”

“You do know this election isn’t for the presidency? Trump has two more years left regardless of the outcome of today’s elections.”

“I’m gonna keep it on the left side of my chest so people know I’m woke as fuck and got Trump out of office.”

“Don’t forget to eat it after.”

Another voter I spoke to was excited to vote Republican across the board:

“I’m tired of these liberals making fun of my hat. How can you think this is a racist hat?”

“Because it says “Fuck N___ers” across the brim in giant block letters.”

“How is that racist?”

“You see that sticker?”

“Yeah, pretty sweet. So why are you voting repub… what am I even asking?”

“Cause of immigrants. These Muslims are coming over from Mexico and raping our lying ass women who keep making up rape stories about men who raped them. I don’t support raping liars. There’s no middle ground with me on this subject, you either rape or get off the pot. That’s how my mama raised me. That’s why I vote Republican. Plus this sticker is mint.”

So don’t forget to vote. Millions of brave men and women fought and died for our right to get a sticker because we are able to tell the difference between red and blue by pointing and shouting “THAT ONE!”