Why “Season’s Greetings” IS The War On Christmas

by Coughlin
in The Other Half
4

Christmas is on a Tuesday this year. Some of you know this. I did not. I thought it was the other day actually because I don’t know how calendars work. I knew Christmas was near, because it’s cold out and there’s a line of kids at the mall waiting to get felt up, but not this near!

Now then, as some of you know, there’s a war on Christmas. This was a secret war for many years until Bill O’Reilly made it know to us all. Bless his heart. See, Christmas doesn’t have enough Jesus in it these days, which is funny because the complaint used to be that there was too much commercialization of The Big Guy’s birthday and now it’s that there isn’t enough. I guess. (Way to go, Starbucks!)

I’m officially neutral in the war as my battles are better fought trying to preserve the sanctity of MMA. But, I do take issue with one thing: the way people greet each other.

This is the laziest invented saying ever. First, it’s ok to acknowledge – as the saying goes – “Jesus is the reason for the season.” It’s true. This shouldn’t be offensive to anyone. I mean, the holiday clearly lost all connection to religion sometime in the 70s, when The Pill became available and we could all enjoy sex guilt free, but it started as a big birthday party.  The only other holiday nearby is Hanukkah which isn’t even a big deal to Jewish people. It’s a minor Jewish holiday that they kinda spun into something else because all the Jewish kids saw their friends getting all kinds of presents for no reason. Smartly, these Jewish parents were like, “Uh, yeah, but you get EIGHT DAYS of presents! … Please, don’t convert.”

Saying “Merry Christmas” to someone isn’t bad. When Ramadan rolls around, I make a point to look up the proper expression to acknowledge the month long starvation that my Muslim friends endure (poor bastards). And if a was around a Frenchman, I wouldn’t think twice to acknowledge Bastille Day (or the entire month of August they take off for vacation). To my atheist friends I just say, “Enjoy the lack of irrational guilt in your life.”

Happy Holidays is next that’s ok to say. It at least acknowledges that there are in fact holidays around. Obviously Christmas is the big one, but “Happy Holidays” would also incorporate Hanukkah and, I guess, New Year’s Eve/Day. That last one is odd because we all celebrate it because it’s a license to drink and pretend like we’re “Totally going to be different this year, just you watch!” but it isn’t like I really go around wishing people a Happy New Year. Still, it’s close enough that it sometimes becomes, “Merry Christmas and a Happy New Year.” That’s a mouthful. So, “Happy Holidays” isn’t bad.

“Season’s Greetings” is crap. It’s just shorthand for, “I do not know what to say but I know I should say something as this time of the year is a unique time of the year for the super duper overwhelming majority of people. So, I shall say this saying and you can input whatever meaning you want.”

Season’s Greetings is literally appropriate all year round. Middle of May? “Season’s Greetings” would work because you’d be saying whatever it is we say during Memorial Day. Just say, “Have a nice day” if the religious aspect of hyper commercialization is too much.

No one knows what Kwanzaa is or what to say but I think “Black Power” would fit.

Plus, be nice.  That’s the message of Jesus.  Get right down to it and all he did was walk around telling people, “Can’t you just be nicer a little bit?   That’s all I want. (Oh, and don’t be cheap on the collection plate.)”  If someone isn’t a theist, that’s cool.  They pay their taxes and why should their tax money go to celebrate your/our/everyone else’s holiday?

All the other war on Christmas stuff is made up. I don’t care what color the cups are at Starbucks. If something isn’t offensive until someone else points it out, it isn’t offensive. And I still see Santa everywhere and big pine trees with lights/fire hazards waiting to happen.  And O’Reilly and Co. who get upset that the local government doesn’t feature a life-sized recreation of a woman giving birth while goats look at her is an idiot. 1. That costs money and until the government can pay for things like libraries it can cool it on celebrations; 2. Good. If you love Christmas, it becomes more special when the world is all lit up and pretty and then the post office is drab and gray. Shouldn’t that just highlight how dull and lifeless government is? Let the post office look like the party pooper.

If some store doesn’t put up enough red and green, go somewhere else. Hobby Lobby has all kinds of Christmas stuff everywhere. (Note: Don’t go to Hobby Lobby. You can get sucked in there for hours looking at stuff. Almost all of it useless and yet if I was able, I’d spend a grand there every day, easily, because I like nick-nacks.) Power of the market, invisible hand, all that stuff.

And there’s no reason to worry about “evil anti-Christians winning.” No one can beat Christmas. NO. ONE. It’s a holiday where you get a ton of presents for no reason at all; someone bakes a delicious ham; your mom makes a ton of cookies shaped like snowmen so you can eat a head and feel like a dinosaur; a big fat guy rides around on magical deer and smiles while drinking a Coke; and there are blinking lights to captivate you. It’s the single most modern, ADD-riddled generation, holiday ever. There isn’t a celebration, religious or otherwise, that comes close to that. You tell a 5 year old he can choose between that or a month of solemn prayer and internal reflection and what do you think he’s gonna choose?

In sum, these are the appropriate greetings for approximately the next 48 hours:

And don’t forget, all month long we’ll be featuring our 27 UFC Gifts for the Fight Fan in your life post just for you so you can make Christmas easier on yourself while also being a hero! 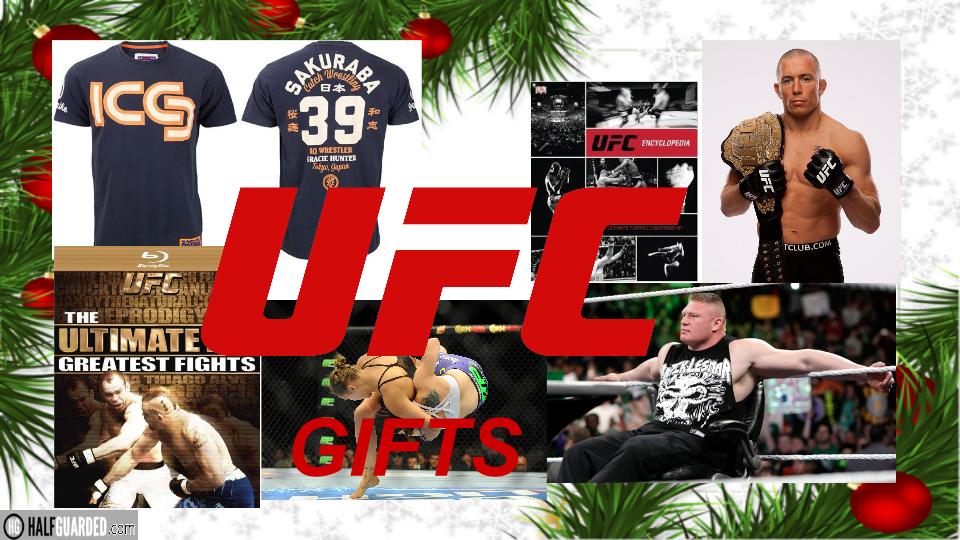 The ultimate gifts for Christmas