With the deadly and destruction wildfires going on in California, along with the President’s controversial tweet threatening to cut federal funding for future wild fires, Halfguarded reached out to the foremost authority on forest fire safety, Smokey The Bear.

“Thank you for joining us Smokey.”

“Thanks for having me.”

“You started in the business in 1944, over 70 years ago. With all the administrations you’ve lived through and dealt with, what’s your opinion of Donald Trump?”

“Listen, you’ve all seen what he says and does. As a fire is going on killing and destroying everything in sight, our President goes on Twitter and threatens to cut funding to fight the fires, while he’s in France, huddled in the corner like a pussy because of a few rain drops, and you need me to elaborate?”

“Excellent point. I’ll move on and simply ask how you’re doing? How’s it been going since you’ve stepped away from the camera due to CGI taking your place in the advertisements?”

“It was time, TV is a young man’s game. I’m still involved, I just get to enjoy the grandcubs more, drink my scotch, smoke my camels, and you know, just be normal.”

“I didn’t always smoke, but knocking up a Hollywood starlet that you’re not suppose to be dating will get your nerves going.”

“You had a kid with an actress? Who? And why didn’t you go public?”

“Because nobody wanted to see the beautiful white girl who starred in The Wizard of Oz with a big black bear in those days. We didn’t have the kid, she Roe V waved it good bye. Rough decision, but it was for the best.”

“Abortion wasn’t legal in those days.”

“When you have unlimited money and cocaine at your fingertips anything is legal.”

“I know you’re short on time so I’ll ask one mor… wait, so you were fucking Judy Garland?!?”

“Was it the beautiful white girl who starred in The Wizard of Oz clue?” 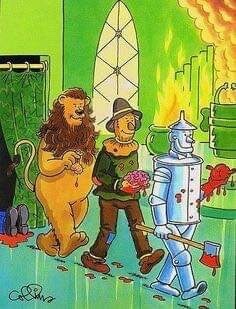 “Yes. Last question, we were told you’re the new spokesperson for Grindr, which is a gay men’s dating app. How did that come to be?”

“I started an account as a goof but it turns out a lot of gay dudes really wanna bang bears. It’s some thing they get off on, so I’d play along and tell them to “come inside my cave so we can homonate for the winter.” Cute shit like that. Long story short, CEO of the company contacts me, comes up with a new slogan and here I am with a safe gay sex gig that’s going nationwide soon.”

“Smokey The Bear says only YOU can prevent foreskin fires. Don’t stick it in a dry cave. Be sure to wrap and lube it before insertion.”

“Touché, Thanks for your time Smoke.”