… but in China.  Fuck you, Disney.  I’m a grown man.  I don’t have children.  I can’t really go to Disneyworld or Disneyland without it looking weird.  I don’t actually want to because I’m a grown man but if you had some full-on MARVEL and STAR-WARS parks, ala the Magic Kingdom, Epcot, and the other ones, I’d go.  I’d fucking go and sit there all day pretending to be Iron Man and Han Solo.  I’d hug Vader and be one of 50,000 assholes every day to say, “I am your father.”

But what do you do?  WHAT DO YOU DO?!?  You put it in … CHINA?!?!  Do you hate America, Disney?  Are we too Jewish for you, is that it?  Not enough slave labor here?  Fuck you, Disney.  Fuck you good and hard. You can’t be all Marvel at Disney theme parks; Star Wars at Disney theme parks – and expect me to not think, “Finally, an excuse to go to Orlando.”

I WANT TO GO ON A COOL MARVEL ROLLER COASTER.  Imagine that one awesome non-cut scene from the first Avengers movie, where the Hulk and everyone are jumping around fighting giant flying dragons and shit.  Now: imagine if that was a fucking ride!  Do it, Disney.  Make that a ride.  Make it like I’m in the Iron Man suit and seeing it all as Tony Stark.  Give me the option of getting drunk while I ride the ride so it’s even more authentic. 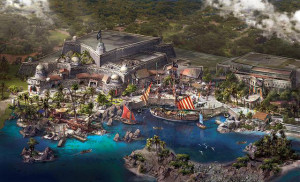 I don’t know what that even is, it’s just a picture Disney used when they talked about all this.  I think it’s a Pirate thing.  The one with Depp.  That’s cool, I guess.  People will always want to be a pirate.  Know what else they want?  TO BE IRON MAN FOR A FEW MINUTES OF MY MISERABLE LIFE!

“Our goal was to create something that was authentically Disney and distinctly Chinese, and we believe we’ve achieved the perfect blend,” said Disney CEO Bob Iger.

Because nothing is more Chinese than Captain America. Prick.

UFC 189 Highlights Video: The Thrill and the Agony