The Importance of Conservatives Denouncing the Racist Alt-Right

by Coughlin
in Editorial, Evergreen, The Other Half
0

Here I was, mid-30s, active on the Internet, well-versed in current events, well-schooled in my beliefs, and yet somehow a new form of “right wing-ed-ness” had emerged without my brilliant mind noticing.  Today, the term dominates headlines.  It’s the newest American melting pot: every evil “ism” that exists, congealed under one label.

At first blush, it’s a tired refrain.  Conservatives have been called racists and Neo-Nazis for decades.  While conservatives retorted that this was nonsense, and made our strong case for why, it is an insult that was still cried like “wolf.”  Unfortunately, now: there be wolves.

Clowns on the Left; Jokers to the Alt-Right

Near as I can tell, the Alt-Right is like any designation: people who claim it come from a variety of backgrounds and beliefs.  Much like how Black Lives Matter houses within its movement intellectuals and people of genuine motives and simultaneously bigots and those who see the cause of police brutality as a means to a greater end.

Nonetheless, for now I’ll use Alt-Right as shorthand for racist behavior and attitudes, generally mixed in with bits and pieces of traditional mainstream rhetoric.  These people usually have a nationalist bent, though the underlying politics aren’t black and white (I couldn’t help myself).  Richard Spencer, one should note, supports universal health care and speaks in praise of Karl Marx.  Maybe key to the Alt-Right is that speech is often delivered with a deliberate attempt to provoke an emotional response, not an intellectual one.

And, yes, I believe there is an Alt-Left.  I’d call them Gawker, if Gawker still existed.  These are people who write pieces that criticize Melania Trump for not denouncing the Iraq War and who accuse someone of a form of phobia if one does not use the correct pronoun (and in some cases even have the government penalize you for said speech).  They cheer as bike locks are used as weapons at protests.

The Alt-Left and the Alt-Right share a number of commonalities: the manner by which things are expressed is as important as the message itself.  Vulgarity and swearing a must, a disregard for truth and civility a given, and above all: a need to be in a well-protected echo chamber, never battling anything but the flimsiest of straw men (and women and those who identify as something in between).

This mindset is the one that claims anyone who didn’t vote for Hillary helped elect Trump, or who said that a vote for anyone but Trump was a vote for Hillary; that is, those silly men and women voting for Governor Johnson or Dr. Stein are culpable for the actions of people they didn’t actually support.  The Alt-Left and Alt-Right are the men, women, children, and puppies of extremists who met having come full circle.

Now, I’m not fond of the term “denunciation” as what does that really mean?  Are American leftists expected to denounce the racist remarks made by their fellow Americans, simply by virtue of also being American?  Of course not.  Simply because a racist believes in lower taxes doesn’t mean that those who believe in lower taxes are racist, anymore than all leftists are culpable for the acts of Stalin, merely because of some overlapping views.

However, “the right” is near where I live and it is my duty, and those with a similar background, to keep our house clean.  Those espousing bigoted views must simply and clearly be denounced.  Full stop.

The conservative precedent for rejecting the fringe

There is a precedent for this as well, one at the very heart of the Modern American Conservative Movement: William F. Buckley.  The man who founded National Review, influenced countless politicians, and who famously stood athwart history yelling, Stop!, was also instrumental in the marginalization of the John Birch Society to the ash-heap of history’s useless movements.

While still technically around today, the JBS was at both in its nascence and at its zenith when in the 1960s Mr. Buckley and those at National Review began a deliberate campaign to discredit the movement.  He saw their voices as rightly doing more harm than good to the conservative cause.  The Society had once openly claimed President Eisenhower was secretly a communist, to put in perspective how far from reality they resided. 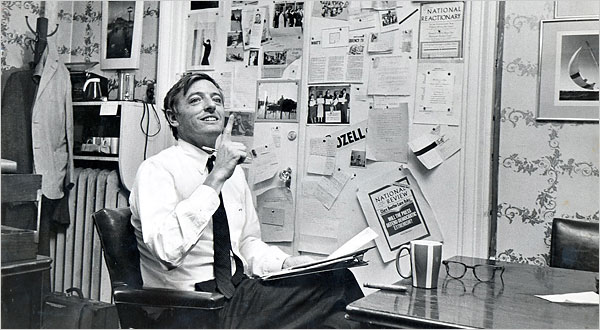 A meeting was eventually held where future Presidential Candidate Barry Goldwater, Mr. Buckley, and others put forth a plan to “excommunicate” the John Birch Society.  Shortly thereafter, Mr. Buckley wrote:

“How can the John Birch Society be an effective political instrument while it is led by a man whose views on current affairs are, at so many critical points . . . so far removed from common sense? That dilemma weighs on conservatives across America. . . . The underlying problem is whether conservatives can continue to acquiesce quietly in a rendition of the causes of the decline of the Republic and the entire Western world which is false, and, besides that, crucially different in practical emphasis from their own.”

It is with great hubris that I now invoke the ghostly endorsement of Mr. Buckley in calling for my friends to resist any and all attempts to pretend the Alt-Right is friendly to “the cause.”

The Alt-Right must be denounced, regardless of credit received

As you’ve no doubt figured out by now, I have not been alive for the entirety of human history.  Claims that today is the most partisan of times seem justifiable, but it’s also entirely plausible that the binoculars we view history through have a familiar rose colored tint.  After all, lost amongst all the chatter of Vice President-Elect Pence enjoying Hamilton is the rather sobering reality that the play is about a Founding Father who was famously murdered by a sitting Vice President.  Today may be bad, but Vice President Biden has not murdered Condoleezza Rice. (Yet?)

It’s unlikely those of us who thoughtfully and sternly reject coded White Nationalism will be appreciated but that’s also irrelevant.  Denouncing people who are a little too cozy with Anti-Semitic rhetoric may fall on the deaf ears of the left, but doing the right thing is an imperative, regardless of accolades.  Being on the right side of history is its own reward.  Of course, this is also a cause that requires details be respected, one which must make important distinctions.

For example, there are individuals like Milo Yiannopoulos, a professional provocateur, someone labeled the “first professional troll.”  His cause célèbre is ridiculing what he sees as hyper sensitivity found on college campuses.  If recent stories about the police being called regarding a “hate crime” in the form of a post-it note on a campus bulletin board are canaries in coal mines, then Milo will be in business for a long time.  Separating his actual points, which are often well thought out and defensible, from his histrionics may seem like a needlessly difficult exercise but no one said life was easy.

Note, please, he doesn’t need nor want any defense.  He’s perfectly capable of doing so on his own.  Milo, as any good troll knows, revels in banishment and overreactions to his work.  Well, he probably did, until he lost a book deal for a remark about his being molested once. (Note from Future Mike: Boy, Milo sure has disappeared, hasn’t he?)

There are also those who seek to re-affirm the values of traditional Western society. (Free market capitalism, freedom of speech, and all that stuff – you know what they are and if you don’t then how on earth are you able to use a computer?) Again, these people are sometimes lumped in with the Alt-Right but it’s unfair. These individuals are more or less expressing the classic liberal adherence to liberty as the central-most important value for a free society.

I see the Alt-Right as cannibalizing much of the pro-traditional-Western-Values language for its own purposes.  Often, the speeches and pieces from said people sound similar to others, they just happen to casually throw in “white” in place of “western” or “classical liberal.”  That’s a difference and an important one.  From a thousand feet up, most causes have similar language.  Whether it was FDR, Hitler, or Bill Clinton, “we will be better together, stronger, happier” and so on rings loudly.  Such is the danger of only listening to platitudes.

The damning video above of an Alt-Right “convention” has rightfully angered people.  Now, from what I recall, it was attended by all of 200 people, so we’re not exactly talking a Million Man March of Hate.  And a part of me even suspects that on some level the deliberate references to Nazi imagery are simply trolling; people know they’ll be called Nazis so they ham it up and laugh.

While I love – if not live for – trolling at times, there are simply some things that one should reconsider.  They aren’t mocking Nazism so much as they’re saying, “Fine, I’ll play to type, just to annoy you.”  Their actions aren’t a refutation of National Socialism.  They should be, always. And this is me giving them a benefit of the doubt that hasn’t been earned. This is the best case scenario, not a realistic one.  The sad truth is that they likely aren’t glorified trolls but rather bigots who now feel their time has come; a modern “the South Will Rise Again.”

I’ve been at Catholic Masses and sometimes people are asked to extend their right hand as a symbolic gesture of blessing … something (Babies? Bingo halls? I daydream in church).  I like to joke that if a Jewish person were to walk in at that moment, they’d shake their head and mutter, “I knew it.”  Personally, even though I know the action is benign and in no way connected to Nazis, it feels “icky” to me, so powerful is the imagery of Hitler and his monstrous movement.

Even if these Alt-Right speakers truly don’t believe in anything Nazi related, when you give an entire speech talking about how great White People are and then yell “Hail Trump” or some such nonsense, you’re not a credible movement and should be disavowed.  That many of these Alt-Right individuals are more interested in shouting at people than engaging in discourse undermines their faith in their own “beliefs.”  Conservatives/libertarians and so on should not hesitate to loudly ostracize these fools, to ensure that it’s clear to the world they do not represent in any manner the beliefs of classical liberalism.

The war of ideas is the longest and greatest war of human history.  It is also the most important.  It appears that many Alt-Right individuals no longer wish to engage and are happy to live in their own echo chamber, with no appreciation for the irony.

While they may not engage, “we” should.  Conservatives should continue the good work of willingly debating, talking, and writing to our Liberal Friends, acknowledging that civil discourse is a must.  Blatantly anti-Semitic and racist statements have no place nor purpose and it should feel like no burden to denounce them.

No, it doesn’t mean they should be prevented from speaking.  I wish society wasn’t at a place where defending the basic concept of freedom of speech needs to be affirmed but it is.  Or maybe it always has been.  Regardless, disgusting speech is the speech most in need of protection.

That there are those on the Left that fight dirty, or who try to close off entire universities to thoughts they don’t like, is outrageous but also irrelevant whereas it concerns the duty to refute the Alt-Right.

The enemy of an enemy is not a friend: he is still an enemy.

Mama Said by The Shirelles lyric breakdown: aka what’s stuck in... BRIAN’S head!!!!

Mama Said by The Shirelles lyric breakdown: aka what’s stuck in... BRIAN’S head!!!!