Trump: “Presidents’ Day Should Be Renamed to President Trump Day. It’s The Least America Can Do For Me!”

President Trump never fails to disappoint when it comes to self aggrandizing. In his latest rant on The White House Lawn, Trump declared he should have his own holiday as he wants to commandeer Presidents’ Day and make it his own.

“Look, I’m the greatest president this country has ever had. Lincoln might’ve freed the blacks but I’ve brought the lowest unemployment they’ve ever had since slavery. They all had jobs under Lincoln but under me they actually get paid. Presidents’ Day should be renamed President Trump Day. It’s the least America can do for me!”

When confronted by reporters Trump elaborated.

“Since I took office Asians are working again. We finally have Chinese restaurants and Karate schools. You never saw that under Obama. He hated Asians, that’s why you never saw him doing Karate like me. I do the best Karate. Lowest Asian unemployment in history! I’m even giving them a month like the blacks get. Asian History Month will be in February, they can share it. That’s how Tiger Woods was made.” 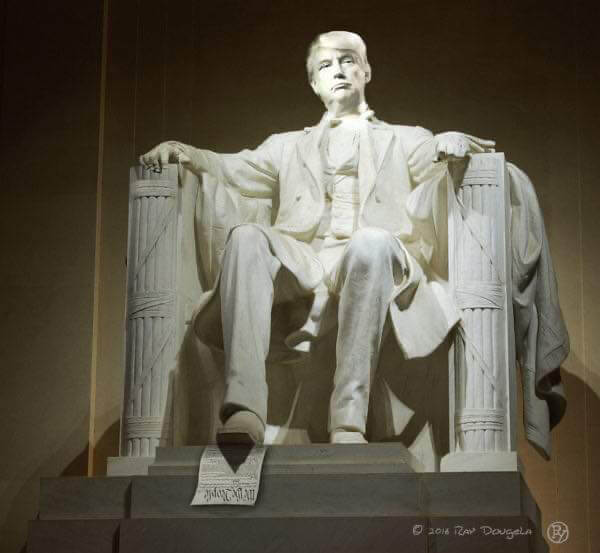 Stunned reporters watched on in silence as he continued.

“I’ve done things for this country nobody ever thought imaginable. We have an Army, Wendy’s brought back spicy chicken nuggets, and OJ is on Twitter! Nobody else has a track record like that. By 2024 I’ll probably have the first black player in the NHL. Imagine that, a black guy playing hockey!”

-He suggested kids should go around door
to door, in costumes, and ask lower income neighbors for candy.

-After that he said they should go home and enjoy a giant turkey meal with their families, but only if they all have jobs.

-The night would be capped off by singing Donald Trump Carols and hiding colored eggs and people’s social security disability checks where nobody will ever find them.