Invicta 19 and Roxanne Modafferi … it could get emotional.

We hear these terms tossed liberally around sport, almost always in relation to those very top athletes enjoying the rich lifestyle that success at the very pinnacle of the most affluent sports and franchises provides. Then there are those who have shown those qualities their entire careers regardless how high or lucrative the platform they had to perform on.

When Roxanne Modafferi began competing in MMA in 2003 the women’s scene was almost non existent. Relegated to rare spots on small bush league cards and with the ground breaking televised Carano vs Kedzie fight still some five years away, pursuing women’s MMA was a choice of passion not a viable career or path to stardom. The scene was somewhat better in Japan than the US at the time and that’s where “The Happy Warrior” spent much of her early career while studying linguistics, particularly in the dedicated women promotion Smackgirl.

Roxanne dedicated herself to being a student of the sport, striving to learn disciplines and improve her game, picking up a few regional titles along the way and winning a one night tournament in K-Grace in Tokyo in 2007.

But just as the women’s scene was starting to gain a small momentum in the US and becoming a fixture on Strikeforce shows, Roxanne record took a hit. She lost her two Strikeforce matches to Marloes Connen and Sarah Kaufman and then had a run of five further defeats suffered in the US, Japan and England.

Then came the Rousey vs Tate season of the Ultimate Fighter in 2013 and Modafferi made the most of her invitation by causing an upset and submitting Valérie Létourneau (who in her own UFC career would go onto get a straw weight title shot against Joanna Jedrzejczyk and take her to the distance) to win a place in the house.

Although she lost her tournament fight to Jessica Rakoczy, Roxanne proved to be one of the stars of the season. Her affable personality and positive outlook on life warmed her to viewers and added to her fan following. She gained a spot on the finale show, however after losing by decision to Raquel Pennington some journalists declared that she had been left behind by the rise in standards of women’s MMA and questioned if fighting was really for her.

Here’s where the real heart, passion and determination came into play. Roxanne regrouped and almost a year later a stronger Roxanne made her return to MMA at the eighth Invicta show when the promotion was mixing up and coming talent with experienced, familiar faces which was a perfect fit for the happy warrior.

In her debut she was matched to complete a trilogy with Tara Larosa and there as she entered the cage there was no denying the joy on her face at getting to compete again. However she wasn’t there to live of her cult following and popularity, she seemed determined to justify her place in Invicta by rebuilding her career and she got off to the perfect start. She beat Larosa by decision and looked fantastic in the process proving a much improved fighter.

Roxanne has become a staple of the promotion, always popular with her cosplay weigh in antics and her successful comeback has included some impressive and entertainingly fast paced performances. After two years her Invicta record stands at 4-1 with victories over much fancied talent as Anna DeBennett and Andrea Lee with her experience and hard earned textbook technique and a high pressure style proving the superior factors in her decision victories.

On September 23rd Roxanne looks to complete the turn around in her career by wining the Invicta interim Flyweight championship. After more than 30 fights in a near fifteen year career built on passion and dedication, often without the promise of fame and fortune, this could be an emotional night if the happy warrior and can strap that belt around her waist.

Standing in the way of the biggest night in Roxanne’s career is interim champ Jennifer Maia. Maia won the title back in March in a great back and forth match over Vanessa Porto, where she had to come back from being decked in the first round but ultimately proved the stronger particularly during the championship rounds.

Maia was in tears at the emotional victory and justifiably so as it signified the completion of her own career turn around in front of American audiences. Maia had previously suffered two losses in Invicta to Leslie Smith and Anna DeBennett, however she kept adding to her win column with victories in Brazil. Maia has a heavy boxing background, but her title victory proved she is more than comfortable on the ground with submission wrestling. 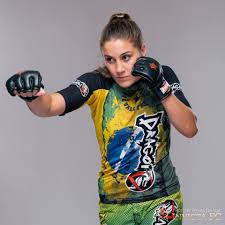 Of all the Invicta main events this one as well as been an intriguing contest could provide one of the most magical moments in the promotion’s history.

Do you speak Portuguese? If you do, boy do we have the UFC Fight Brazil Fight Night: Cyborg vs. Lansberg videos for you!

Do you speak Portuguese? If you do, boy do we have the UFC Fight Brazil Fight Night: Cyborg vs. Lansberg videos for you!