IT’S ALL REAL: Daniel Day Lewis does not exist

Lincoln was a great man but not all great men are good men.  While we applaud him today for his leading the country during a time of turmoil, credit him with ending slavery, and are thankful he kept the nation united, remember: Lincoln freed the slaves by executive order – he simply did it because he wanted to, not because of any vote by the people or decision by a court, in direct opposition to the very notions of democracy.  Lincoln signed into law the suspension of  the right of habeas corpus – the very right to challenge an imprisonment.

Clearly, though Lincoln did many good things, he was also a man willing to do whatever, whenever, so long as he felt the ends justified the means.  Necessary evils are still evils.

In Gangs of New York, we see Lincoln after he faked his death.  The movie even throws it in our face, acknowledging that it takes place in the exact same decade as the Civil War.  Now, Lincoln has taken on the name of  Bill “the Butcher” Cutting – a man who runs part of the newly entrenched political establishment of New York City.  Lincoln knew how to manipulate Boss Tweed so well, how to maneuver what would have been impossibly dangerous political waters.  More believable: a poor, uneducated murdering type knows how to play politicians against one another, or the former President of the Greatest Country Ever?

Then, There Will Be Blood.  Lincoln has had enough.  He has served his country, faked his death, tried to fix New York, and now he’s gone West to make his money.  Going west to restart is the quintessential American tradition.  Daniel Planview is a man of one thing: ambition.  Lincoln wasn’t?  He became President of the country to one day lose to Vietnam.  Only men of ambition reach those heights.

We see in Blood how Lincoln is able to manipulate the town, buying up land, knowing what needs to be done well before he puts his full plan into action.  And how does he do this?  Through oration.  He’s a salesman; a silver tongued devil.  And of course Lincoln was known as nothing if not a brilliant public speaker.

And, as we see today, what do all politicians do after they are done with public life?  They go into the private sector and make as much money as possible.  Funny how Plainview knew exactly where the oil would be.  It’s almost as if he had information that only a President would’ve had access to…

But it isn’t just the outward ambitions that clearly show that Honest Abe one day became an oil baron – it’s the internal forces as well.  Lincoln saw many of his children die young or at birth.  In Gangs what does he do?  Becomes a surrogate father to Leonardo DiCaprio.  In Blood?  Adopts a child that was abandoned after a worker’s death.  These aren’t the actions of a sociopath (I’d know) but rather those of a man desperately trying to recreate the family he never had.

The Presidency took from his a chance at a normal family (that and his mentally ill wife).  Rather than discard DiCaprio and the Deaf Kid like he would any others, Lincoln saw a chance to relive a part of his life he’d kept hidden from the world.

Further, in Blood he slips and mentions being from the Wisconsin area.  Lincoln was born in Kentucky and made his mark in Illinois.  Trust me, Illinois and Wisconsin are the same once you ignore Chicago.

But, finally, in a way that only a man who’d had unchallenged power would, this emperor wore one hat.

The man didn’t even bother to get a new hat.  And of course the smoking, how can we ignore the smoking? 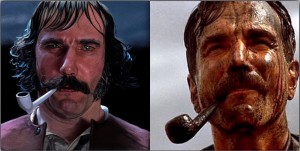 Finally, look at the eyes.  This is Abe Lincoln and this is Plainview.  There are the eyes of ambition, of hate, of focus.

THE GOOD DINOSAUR trailer 2 from Pixar makes you say Awe