Lucifer TV show review: The Devil made me do it

Somehow – and we know this was on purpose because c’mon – the pilot episode of Fox’s upcoming Lucifer tv show was leaked on the internet.  I didn’t want to watch it, as I feared doing so may violate Fox’s intellectual property rights, but as a journalist of high repute I had no choice.  And thus is your Lucifer TV show review of evil!

Yup.  It’s The Devil.  Lucifer Morningstar is the star of the show.  The ultimate evil big bad hates God tempts us all – that guy.  It’s based – loosely – on the Vertigo/DC comic book of the same name.  In the comics, Lucifer first appears in the legendary The Sandman series, written by Neil Gaiman.  There’s a twist.  Because of course there is: The Devil quit Hell.

Lucifer got tired of being the ruler of Hell and so he up and quits.  Goes to earth, and has fun.  He repeatedly refers to God as “dad” and the other angels that show up here and there are his “family.”  The TV follows this as the basics of its plot.

The Devil is in the details

Lucifer is ultimately going to be a dressed up crime procedural.  CSI meets The Bible meets Sex & Drugs.  This isn’t the worst thing.  After his popularity in The Sandman, Lucifer got his own comic title of the same name.  It went on for 75 issues then ended.  Now the character is out there but who knows what he’s really doing.  I’m much more forgiving of Big Hollywood tinkering with a comic like Lucifer than I would be if they tried the same with The Sandman, for example.  Lucifer solving crimes, tempting people, being charming, having a smooth British accent: that’s cool.

The Devil May Care – Unfortunately

Naturally, like the comic, this isn’t the evil horrible Devil you’d imagine.  No one is going to watch a weekly TV show about someone that goes around raping and murdering.  It’s a bit more nuanced than that. Hell is treated as a place that he’s almost assigned to – one which it’s clear he enjoyed ruling at one time but now feels like a bore.  He’s no angel but – actually, technically the Devil is an angel.  (Both by TV, comic, and theological tradition.)  His leaving Hell is hinted at not being a good thing as without him (wait for it)(no, just wait)(waaaaaaaaait): all hell breaks loose.

He doesn’t care.  There’s a black dude angel who hates him and shows up to more or less taunt him, tell him to get back to hell, and is the antagonist of the show so far.  There is also an internal conflict with Lucifer where he starts to *gasp* maybe care about people – yes, you are watching the redemption story of Satan.

This Devil is a full on hedonist: he drinks, he fucks, he does whatever he wants.  And his “power” is that he can get anyone to reveal their deepest secrets to him.  Oh: and he also can more or less seduce any woman alive.  And he sure as shit doesn’t want anything to do with hell anymore.

He can seduce anyone, except (of course) this one cop, who will become his Buddy Cop partner.  During the pilot, a woman Lucifer helped become a minor pop star is killed because of yada yada (I won’t spoil it but … it’s CSI with The Devil, you know how this goes).  Lucifer is bothered by this (part of the “I can’t believe I might be caring” plot). 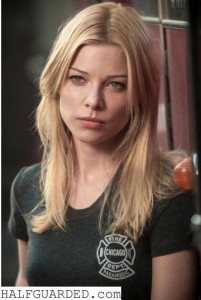 The investigating cop is this chick and Lucifer’s charms don’t work on her.  This “vexes” him and after he helps her close the case using his ability to smooth talk and fuck people the episode ends with them giving the unspoken, “We’ll be seeing more of each other” look.

I’ll watch.  The lead actor plays a convincing Fuck Machine.  His Buddy Cop is fine.  That black dude actor I’ve seen before and like.  And the psychiatrist that Lucifer may talk to ala Tony Soprano is … actually, I kind of hate her for an irrational reason but whatever.

The last property of this vein that came out was NBC’s Constantine.  I really wanted to like that one, as John Constantine is one of my absolute favorite characters.  The show was serviceable but that was it.  I couldn’t say it was good – just not bad.  Lucifer is better than not bad so far.  The writing is a bit crisper, even though obviously just one Big Hollywood TV trope after another, and face it: smooth talking dudes who bang a lot of hot chicks, who never tell lies (it’s a funny bit where he literally tells people he’s The Devil and no one believes him because Duh), and who then solves random murders is fine time-killing TV.  Which is fine, it isn’t reinventing the wheel.

What is a Slide Tackle? I Explain Soccer/Football