by The PunMaster General
in Evergreen, The Other Half
1

Today marks the anniversary of my dad’s death. I miss him. I realize this site is primarily about getting people to read about the UFC’s Steroid problems and why there should be sequels to some of the world’s best films, including Dracula Untold, Grown Ups, and of course a third National Treasure (this is called humor people, those movies sucked), but we’re also open to articles from just about anyone on just about any topic.

(Seriously, if you want to write something or promote your thing, we’ll probably publish it.)

To that end, I wanted to share one of my dad’s most legendary stories. The story of Satan’s Raccoon. The following comes from an email my dad shared shortly after the incident. I chose to not clean up the typos and other grammatical errors so you could get the full effect.

The Legend of Satan’s Raccoon

Big excitement around the house Wednesday night..  We had a raccoon in the attic who was too smart for the cage type trap that had been up there for  week.  Could hear the thing roaming around .  So they set another kind (a snap type) trap that kills the thing.  It was doing damage and had to go.  Exterminator told Sue that the trap will snap down on the neck and it may scream for a few seconds – maybe 1/2 minute or so – and then die.

Sue went to her cancer support group about 7 pm.  About 15 minutes later I hear this loud snap followed by the screaming and growling and screaming and growling-one really mad raccoon.  Jumping up and down – thrashing about!  Dead in 1/2 minute my ass!.  Crashing around up there.  mad as hell.- keeps thrashing around.  Lots of noise.  The trap had been set in a white plastic bucket in the space above Mikes bedroom which has a trap door (basically a piece of plywood set in a (cheezy) frame that you push up from below, need a ladder to get up there)  My idea was to let the thing die and call the exterminator and tell him to come and get it, perhaps in the morning.  It is up in the attic, out of sight.  Sorry but that’s life.

Well the raccoon had other ideas,  Really mad, keeps screaming and growling and thrashing and bouncing for several minutes and manages to get the bucket/trap over the trap door and is bouncing up and down (I am in the family room on the first floor level – it is dark upstairs and I really am not interested in being right up there).  Then the whole thing comes crashing down into Mike’s upstairs bedroom.  Holy crap what a loud noise (I still hadn’t figured it out – still down in the family room barefoot and hoping it would just quickly expire.)  Now I hear it moving around -could it be in the upstairs bedrooms ??  How the hell did it get the trap door open? What demon from hell was loose in my house! I walk into the foyer and look up (please note I had not been home when the trapper left the trap so did not know of his arrangement or about the bucket)  It is dark – I do not want to turn on the lights and startle it-besides I couldn’t figure how this animal had gotten down from the attic.  Now I see this white thing (I later figure it must have been the side of the bucket) moving around and this screaming growling very angry monster thrashing about the landing – Holy Crap – I call the trapper and get a voice mail and leave a rather excited message that his damn animal has gotten loose and is thrashing and trashing my house.  There is a gun in the house but the animal is between me and it.  Now it is working its angry way towards the stairs leading down to the first floor.  I call the cops. 911- Lady says (snottily) “Sir we do not send police out to homes to catch animals. ”  “Lady, I said, this is a really mad angry raccoon in a trap that has gotten loose, somehow broken out from my attic, trashed the upstairs and is coming after me like some goddam Steven King Horror movie.  I don’t have a gun.  I have called the exterminator but am bearfoot out on my deck with a dog and need a cop real fast”  The bitch argues with me.  I must have sounded terrified – I was- all I could think of was some 800 pound monster with a snap trap on its ass bustin up my house.  Shereluctantly agreed to send a cop and finally  (probably 5 minutes but seemed like 1/2 hour) two cops came.  I met them at the front door and we looked in and the beast had dragged the trap, bucket and itself down to the end of the stairs to the first floor level.  The cops went in but the raccoon was losing strength.  It went under a little table in the front hall and stayed there.  I finally got ahold of the trapper and he said he was on his way (was 1/2 hour to 45 minutes away).  Cops and me went upstairs.  What a mess.  Poop and pee all over, and a mess where the trap door had given away and around the landing – stank like hell.  Cops and me discussed taking it out onto the front lawn and shooting it -it was in bad shape – fortunately no blood.  It started to sleep and died just as the trapper guy arrived – followed into the driveway by Sue coming home from her meeting.  What a mess.  I had called Servicemaster and they are sending a cleanup crew tomorrow – trapper guy had some spray to reduce the smell.  Raccoon was a female – couldn’t tell if it had delivered its babies or not but we suspect they may be in the attic and going to be crying in the morning.

I have no doubt that my 911 call was taped and will be played over the internet soon!  “Girly man calls police because animal loose in his house!”  Even the cops were impressed by the mess the animal made and understood the racket it must have made as it crashed through the ceiling down to the second floor level.!  Good thing Sue wasn’t home alone when it happened.  Quite an evening,

Epilogue:  To all you animal lovers who feel sorry for the poor little raccoon – BITE ME! Damn thing was destroying the exhaust fan in the attic.  It was creating havoc and refused to enter the cage trap that would have allowed it to be released out in some farmer’s field where it could terrorize some other people.  Exterminator said it was “cage adverse” meaning it had probably been caught before and had learned to avoid the cage traps.  Well, this recidivist raccoon got what it deserved!  You try sitting in a dark house with a wild animal crashing through a ceiling, screaming and growling and thrashing about and crapping and peeing all over and coming down the stairs thump . .  thump . . .  thump dragging a plastic bucket and trap and really mad – probably all rabid and foaming at the mouth- if I had a bazooka I would have used it. 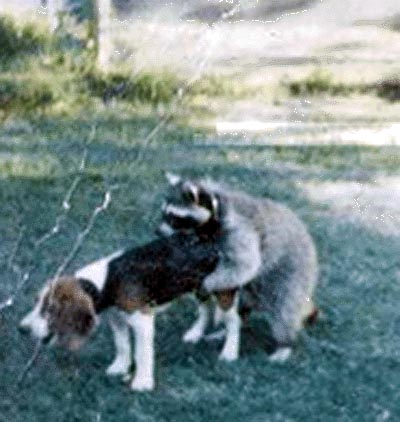 This is my dad holding me for the first time. He always had stylish glasses.