During a recent media call with reporters, Trump mocked his opponent Joe Biden by saying once he’s elected, he will still remain faithful to his wife.

The quote was similar to the one Trump issued when mocking Biden about listening to scientists once he’s elected. Now, Donald
is doubling down by mocking Biden for continuing to not be a piece of dog shit if he wins in November.

“This guy, he acts all faithful to his wife, but the thing is, if he’s elected, he’s still going to listen to his wife and not sleep with other broads! Can you imagine? Actually living by standards and not just saying things to get elected?”

Trump later made things worse on Twitter, as he always does: 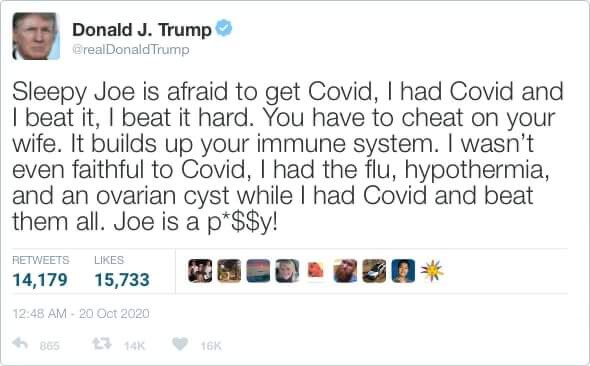 When asked to comment on her husband’s statement, Third Lady Melania Trump had this to say in shitty broken English:

“Donald is man, man have needs. When I marry Donald I know he cheat. I accept that I won’t be the only woman he can’t satisfy with his mushy pee pee.”

Joe Biden was reached for comment but just told a story about a childhood friend named “Hickory Smoke” who sold pornographic doorknob hangers by the side of the road in his hometown of Scranton, PA.

Get out and vote kids.

Marvel had diversity in the 80's and no one freaked out.