President Trump addressed growing concern regarding the coronavirus spreading across the United States. He took to Twitter and later furthered his comments at a White House press briefing.

“If the Dems had supported my border wall from day one, this would have never happened. It would have kept the illegal Coronas in Mexico and we’d have no virus!” 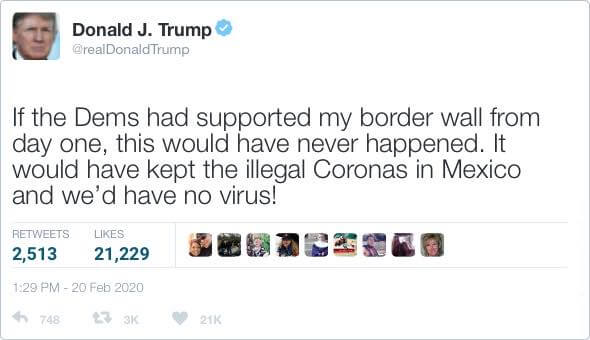 “Stop the illegal smuggling of Corona beer into the U.S. and only allow it in after a long vetting process so the beer doesn’t spoil and cause viruses. Some even contain Lime Disease. Corona and Lime must be stopped!” 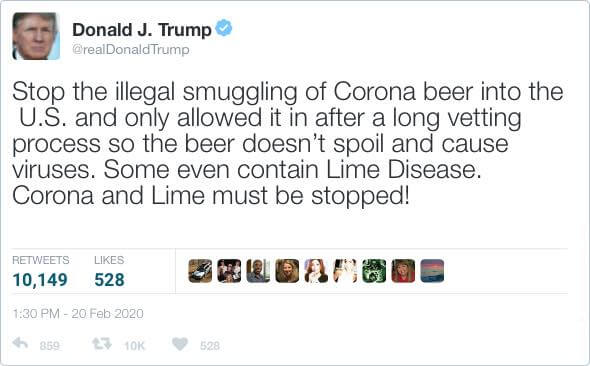 He expanded on these tweets during this exchange with reporters at a press briefing at the White House:

“It’s simple, I have the best scientists in the world and this is what they told me. Corona virus and Lime disease started in Mexico and they can’t pass through walls. Very simple science from my huge brain.”

“Mr. President, for one, coronavirus started in Wuhan, China, not Mexico, and Lyme disease is spelled with a “Y” not an “I” and originated in Lyme, Connecticut, also not in Mexico.”

“Ridiculous, I’ve been eating limes all my life, look at my mouth, that’s how I got such sexy puckered lips, so I know how to spell Lime. Second, it didn’t come from China. The Wuhan isn’t isn’t even from China, they’re from Staten Island New York, Rest In Peace Ol’ Dirty Bastard! So you can keep your fake news.”

“Wuhan sir, not Wu-Tang. Wuhan is the city in China that started the coronavirus outbreak. Again, NOT Mexico.”

“It is Wu-Tang, I have all their albums and they, much like all the blacks, love me. Kanye is my best friend I think I know who The Wu-Tang Clan is! As for China, we know Coronas come from Mexico, you’re being silly. Whoever heard of Chinese Mexican beer? The fake news media doesn’t want to tell the truth about Mexican beer but it’s the entire reason our crime is so high. Not to worry because we will put Corona and Lime on ICE! Get it? Cause our immigration agency is called ICE! I’m very funny.”

When asked about Trump’s latest and most racist comments, trying to blame Mexicans for even more problems they didn’t create, presidential hopeful Elizabeth Warren and other candidates took to twitter and said:

“Modelo is better than Corona anyway and under my new health plan you can drink all the beer you want, and get a new liver within 48 hours.”

“I will to ban all 40 ounce beers across the country and implement a new “Stop and Sip” program at the border where ICE agents can take your beverage and sip it to see if it’s Corona, Modelo, or a Slurpee.”

With all of the 2020 presidential possibilities becoming more clear by the day seems the coronavirus can’t get here fast enough, but then Bernie Sanders tweeted a glimmer of hope when he responded to Trump’s remarks with a very simple:

“He’s a fucking moron we all know this by now. As for Warren and Bloomberg, well you do the math!”

To which Andrew Yang responded: