Yule Britannia….a festive look back at the glory that was Annuals

I vaguely remember when I was seven years old being at school and our teacher was reading us some story about a child who’s mother refused to allow him to grow up. Afterwards the teacher told us a story about Mrs Street another of our teachers (and frankly a right battleaxe of a woman) and how one of her aunties used to buy her Annuals all the way into her teenage years.

Couchzone: The Kids Sci Fi Shows That I Grew Up On.

All around me my fellow pupils found this hysterical and laughed uproariously at the ridiculousness of this. Except for me. I looked round bemused. What was so funny? Why wouldn’t you want annuals when you were a teenager? Really, why would you ever want to stop reading annuals anyway? What kind of life was there to look forward to if it meant having to give up something so joyous? It would be like not celebrating Christmas for God’s sake!

Don’t tell my parents this, but they probably wasted a lot of money on me with Christmas Presents when I was a kid. Not that I’m ungrateful, but when I wandered into the living room on Christmas morning and my still sleepy eyes scanned my welcoming haul of that year’s Christmas presents, there was one thing in particular I was looking for. Sure I was excited for whatever the big showcase (and let’s not deny it, expensive) present was going to be, but the thing I was most thrilled for was seeing that pile of individually wrapped, thin, rectangle shaped gifts. To me, what lay underneath those colourful, glittery, gaudy sheets of giftwrap was a much a staple of Christmas as Santa and the Nativity scene put together.

Those gifts were my yearly loot of a UK tradition that thrilled many geeky kids like myself, the range of books known simply as Annuals. Magazine sized and gloriously hardbacked bound, full of over a hundred wonderful pages of stories, comic strips and features that would keep the young me quietly entertained for the rest of my Christmas holidays. Tearing through the Christmas paper to find out which Annuals I’d scored that year excited the hell out of me, which traditional favourites my parents had bagged for me, which surprises they’d chosen (probably inadvertently) and which ones could I be missing out on that year (annuals for me were purely a Christmas day tradition).

Once the chaos of Christmas dinner was over, The Great Escape had been watched (you’ll only get this if you were a UK child of the 70’s) and all the visitors had finally buggered off home I was free to relax and indulged in what I’d  scored from the vast library of Annuals that were available every year.

One of the most popular genres of Annuals were the television tie ins. The publishers of Annuals would accumulate as many television licenses they could get their hands on, targeting long running popular shows as well as any fads that were proving a hit that year. It would become tradition for shows such as Doctor Who and Blue Peter would have an annual based around it every year while some flash in the pan series such as Buck Rogers, Knight Rider, A-Team, Fall Guy, Blake’s Seven would spawn only one or two Annuals at the highlight of their popularity.

Any hit show in the 70’s and 80’s had an Annual at one time, and even some real stinkers. The massive flop Manimal that was a US show built around a man who could turn into any animal (provided it was a panther) and lasted a mere eight episodes still had an annual produced. Also odd was the choice to translate the ITV light hearted drama “Minder” into an annual in 1985 and 1986, despite it never been a show remotely aimed at kids.

Whatever the show the format was often the same, the Annual would be filled with features,profiles and comic strips which were often rushed and poorly drawn with only a bare resemblance to the famous characters they were supposed to be portraying (crudely drawn as it was a Doctor Who strip in the 1982 annual still creeped me out in it’s depiction of a convey belt of human bodies being fed to baby aliens)  . For me though the it was the inclusion of text stories that were of most appeal. These short stories would be decorated with scenes from the story showing artwork of much better quality than the strips. One eye catching image I remember was from the “V” annual from 1986 which showed a Visitor about to eat a pet rabbit while it’s little girl owner screamed in terror (in the story he got shot in the face before he could enjoy his snack).

In terms of creativity and value for money the best use of the television licenses could probably be found in the Grange Hill annuals that ran throughout the 80’s. Grange Hill was a BBC show set around a supposedly everyday comprehensive school that featured the most troublesome, badly behaved kids in the country that would fight, play truant, take drugs, bully, steal and get pregnant but drew the line at swearing. The Grange Hill annual in an insipred move would adopt the photo story style of comic strips made popular in some Girl’s comics and would actually feature the actors and actresses from the show. Likewise it would expand on the potential of the text stories beyond being simple, entertaining short stories into stories that would build on storylines from the show and tie up loose ends, such as following up on those characters who had left the show.

Another long running Annual series that was made with obvious love was  based on the anarchistic Saturday morning kids show Tiswas, that thrilled 70’s and 80’s kids with a non stop riot of throwing custard pies and buckets of water over presenters, guests, studio audience and filming crews alike. The annuals retained the spirit of the show with creative wild, fanzine like approach to recreate the fun and revolutionary humour that made Saturday mornings worth getting up for (that any every boy’s crush Sally James). Naturally the format of Annuals lent itself perfectly to comics books and some of the more famous titles found their way into UK shores by this lucrative market. A long running series of Annuals based on Star Wars was always a welcome sight once unwrapped and were filled entirely with reprints from the Marvel monthly series (the 1980 Empire Strikes Back Annual featured the entire comic adaption of the movie, which was published before the movie had played in my local cinema, thus meaning it was here on Christmas day that I first found out the shocking revelation that Darth Vader was Luke Skywalker’s father). 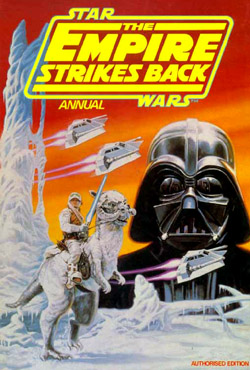 Other Marvel and DC properties took exactly the same line of simply reprinting stories from the American comics. As cheap and lazy this may sound it should be remembered that this was in the days before comic shops were popularised in the UK. At this time access to the adventures of even the most famous heroes such as Spiderman and Batman wasn’t all that easy to come by and so these annuals to me were like gold dust when they popped up in my annual haul. I have very fond memories of a DC’s heroes annual in 1983 that featured a giant Justice League story, an Atom story and a simple but gritty Batman story revolving around the Dark Knight taking down a team of robber’s that I must have re read around 50 times.

More creative use of the format could be found in the annuals of the UK comics. Practically every UK comic whether an action, a funny or a girl’s comic had an Annual, in fact such a money spinner was the format that some annuals would be produced of comics long after they had  actually been ceased being published.  Annuals such as 2000AD, Eagle, Battle would feature brand new exclusive often giant sized stories, making them especially essential to fans of the weekly comic. The UK Transformers comic would heavily promote their annuals, even going so far as to save the final episode of long running sagas exclusively for the hardback specials.

Likewise the vast library of UK funnies such as Beano, Dandy, Jackpot, Beezer would produce bumper sized stories in their annuals, featuring their most loved characters in special Christmas themed episodes.

Make no mistake, the annuals were big business and the choice vast, stretching over into sport and music. The BBC quiz show Question of Sport produced an Annual full of questions from the show and in 1983 and 1984 there was even a Big Daddy annual.

Naturally regardless of what my seven year old self thought at the time, as I got older I started to grow out of the annuals, except for buying the odd Marvel Annual if there was a chance to pick up an old story cheap (The spiderman 1986 Annual for example that collected the two issue slugfest with Firelord). But the memories of those days still remain strong.

It’s sad then with what I see has become of the Annual market today. Yes Annuals are still going strong and finding their way into British youngsters stockings, but frankly they have devolved into a crap shell of their former glories. Stories of any kind have disappeared no doubt to cut the need to pay writers to produce content. Instead the Annuals have followed suit with the UK Licensed comic industry by filling their page quotas with nothing but puzzles and photo spreads.

It’s been suggested to me that I’m romanticising about the quality of the Annuals back in the day, but while I’m sure that the stories that engrossed me for hours as a youngster would not hold up to the scrutiny of a an adult they were still more value for money than the shoddy read in two minutes photo collections that pass for Annuals today. Even the superhero comics have adopted this format and ditched the reprints that at least would have made for a good afternoon reading session.

Of this years Annuals only the Beano and Dandy have committed to putting in the time to producing original content for their readers. I can’t help but feel sad for the children of today that have missed out on when some actual care and creativity went into doing justice to their favourite TV shows and comics.

Last week I was killing some time before work at Chesterfield Market when I happily discovered a stall selling nothing but old Annuals. Stretching back to the 60’s this collection spun the whole range of genres, comic based, film, TV, some I’d owned myself and could probably recite the contents just by looking at the covers. Others were ones I’d never seen, such as the Annuals of the notorious “Action” comic.

This stall more than anything took me back to happy Christmas mornings and browsing the Annuals with these inciting covers, it made me long for just one more relaxing Boxing day of doing nothing but sitting and reading them all again.

Oh yeah,  if anyone wants to point out the irony of me criticising the current crop of annuals for padding out their books with lots of gratuitous big photos when  I’ve done the same in this article It’s Christmas and I’m busy ok?

Letters to a stupid-@$$ Xtian nation... Keep Jesus out of Xmas

How much you know about yourself if you’ve never been in a fight?

Couchzone: The Kids Sci Fi Shows That I Grew Up On.

Bucking your childhood as you battle planets.

Letters to a stupid-@$$ Xtian nation... Keep Jesus out of Xmas